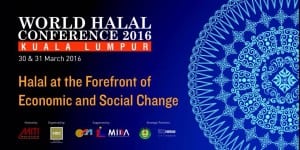 Industry Development Corporation (HDC), will host this year’s World Halal Conference (WHC) from the 30th until the 31st of March with the theme ‘Halal at the Forefront of Economic and Social change’.

The two-day conference will focus on various aspects of the Halal industry including the challenges facing the global Halal economy, the rise of Halal e-commerce and new business opportunities, and the need to develop talent.

More than 1000 Halal stakeholders and foreign delegates are expected to participate in the conference. YAB Tun Abdullah Haji Ahmad Badawi, the patron of World Halal Conference will give the welcoming remarks during the conference.

“The development of the Halal economy is led mostly by sizeable and growing Muslim population as well as the increase in Muslim consumer purchasing power. The world’s Muslim population is expected to increase by 35% in the next 20 years, rising from 1.8 billion to 2.2 billion by 2030,” said Mustapa.

Malaysia still assumes a leading role in the development of the global Halal Industry, and is intensifying its efforts even more in business trade and other commercial opportunities. Strategic collaborations and partnership between government agencies, consumers and producers remain the strategic initiatives in achieving sustainable Halal production.

Mustapa adds, “The economic growth within Muslim countries had led to an increase in disposable incomes, thus the need to ensure sustainability in the supply of Halal food and consumer products.”

The conference also saw the strategic allegiance of HDC and various SME’s in an effort to uplift local Halal economy. One of which, was a Memorandum of Understanding between HDC and Nestle that sought the support to build local productive capacity, enhance social inclusion, and promote environmental sustainability.

A halal e-commerce platform was also launched, aptly named HDCdirectory.com. The website will signify the efforts of HDC to engage and promote various Halal activities on E-commerce.

Despite the lacklustre prediction of the global economic sphere, the demand for Halal products remains positive. Malaysia stands as the biggest Halal exporter next to China with an increase of 4% in its export value in 2015.