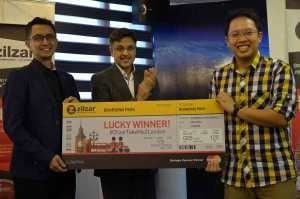 “The Zilzar team was thrilled with the enthusiastic response for this engagement which saw involvement of over 1,200 participants. This was a great avenue for us to interact closely with new Zilzar users and will be the first of many future campaigns on our platform,” said Rushdi Siddiqui, Co-founder and CEO, Zilzar Tech Sdn Bhd.

The lucky winner, Ridzwan Hafidz was an exhibitor at the World Halal Summit where Zilzar had a presence and set up booth to create awareness and also interact with visitors through the engaging initiative. Ridzwan, who is an executive with a local food manufacturer said, “I’m very happy to have won the tickets. When I learned about the contest, I started thinking about all the places I could visit in London, and so I gave it a shot. It was also a worthwhile experience as I was also able to sign up with Zilzar as a seller on their trade platform and look forward to being a part of exciting marketplace.”

The 4-day long campaign, which took place at the recent World Halal Summit 2015, was open to all Malaysian citizens above 18 years. The participants were asked to sign up with Zilzar and/or take ‘selfies’ at the Zilzar booth and upload it onto Facebook or Twitter with the hashtag #ZilzarTakeMe2London.