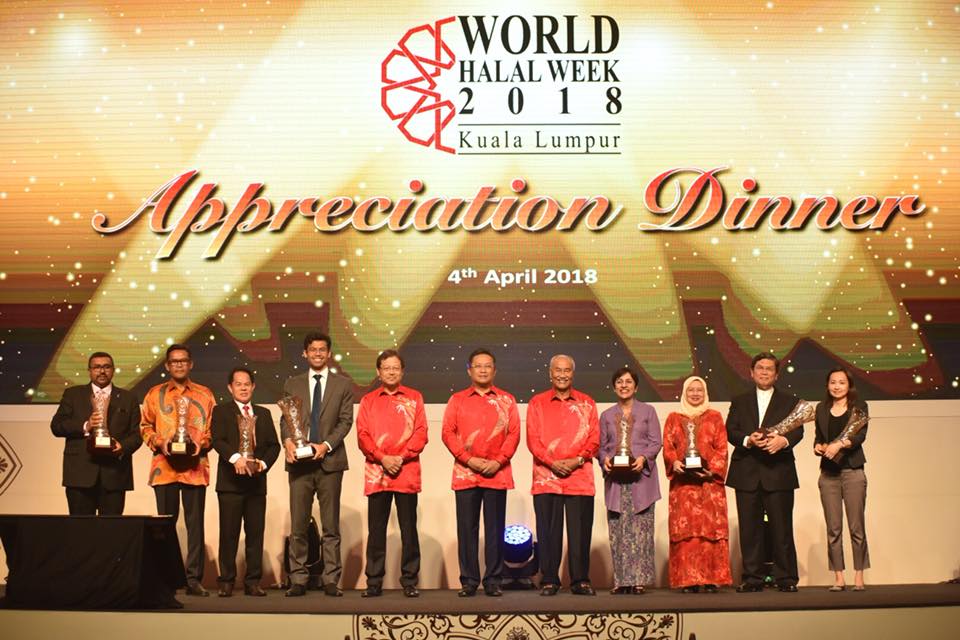 KUALA LUMPUR — Malaysia’s Halal industry tonight recognised the contributions of eight individuals, institutions and companies as recipients of the 2018 Halal Excellence Awards in appreciation for their outstanding achievements in the global Halal industry.

Brahim’s Holdings Berhad was awarded the Halal Excellence Award in honour of their exceptional contributions and commitment for the development of the overall Halal industry. The award was accepted by its Executive Chairman, Dato’ Seri Ibrahim Bin Haji Ahmad.

The Halal Brand Award was presented to McDonalds Malaysia in honour of a high-profile brand and trademark built throughout the Halal industry, and to celebrate the company’s creative excellence and consistency in promoting the international acceptance and upholding the Halal integrity.

The Human Resource Development Fund (HRDF) meanwhile, received the Talent Development Award in acknowledgment of its outstanding contributions made to uphold human capital development in the Halal economy. Malaysia has trained more than 60,000 Halal knowledge workers since 2008.

For its innovating ideas including efforts and commitment in pioneering Halal research & development through science and technology, the Halal Products Research Institute (HPRI) was presented the Halal Science and Research award.

Broadcasting agency NHK, Japan was also recognized with the Halal Awareness Initiative Award for its outstanding initiatives that have helped contributed to higher levels of consumer awareness internationally and to encourage organisations and global companies to venture into the Halal businesses.

The 2018 Halal Excellence Award also recognized the late Tan Sri Dr. Surin Abdul Halim Ismail Pitsuwan with a Special Award in acknowledgement of his very influential in the development of the global halal industry. He spoke at many international conferences about halal wisdom, halal trade, tourism and talent. Tan Sri Dr. Surin had