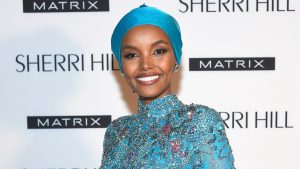 Modest fashion trailblazer Halima Aden is officially adding “fashion designer” to her multi-hyphenate title. Collaborating with Turkish modest-wear e-platform Modanisa, Aden is due to release a collection of headscarves at the second edition of Istanbul Modest Fashion Week, taking place 20-21 April. The line will reportedly comprise 27 headscarves, all co-created by the American-Somali model and street style fav.

The pioneering fashion event has seen great success in London, Dubai and Jakarta since its inaugural event in Istanbul in 2016, drawing increasing international attention to the flourishing modest fashion sector. Halima herself hit the Dubai Modest Fashion Week catwalk in 2017.

This year’s event in Turkey will also see the unveiling of Ramadan collections from a mix of up-and-coming and established Turkish designers.

Off the catwalk, she’s built a reputation as a streetwear style star with a penchant for bold prints and bright colours, so it’s hardly a surprise that she’s trying her hand at design.

In a recent interview with Paper, the hijabi model declared that an absolute modest fashion must-have is “a nude-toned hijab” – perhaps we’ll be seeing some neutral tones in the collection too? Stay tuned to find out more on Halima’s debut collection.