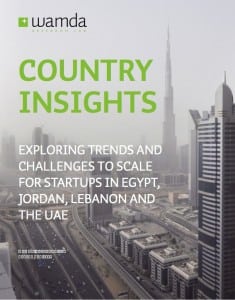 These four countries have been home to the lion’s share of entrepreneurship development in MENA in terms of new funds, incubators and other institutions supporting entrepreneurs. Gradually, best practices in supporting entrepreneurs are developing in each country, yet many challenges remain. This report looks at some of the main trends in ecosystem development in each country while also highlighting some of the most prominent obstacles needing to be solved.

Over the past two years the Wamda Research Lab has mapped the organizations supporting fast growing and growth-driven entrepreneurs in the Middle East and North Africa (MENA). The findings from our research suggest that more and more players are realizing the economic and social returns that supporting entrepreneurship can have on cities, countries and the region itself. Here are some important insights:

Additionally, institutions in Egypt, Jordan, Lebanon and the United Arab Emirates (UAE) made up roughly 60% of the organizations included in the mapping. Each of these four countries has become a key player in shaping MENA’s entrepreneurship ecosystem in recent years as their respective ecosystems have taken root and begun to grow. However, the process of creating healthy entrepreneurship ecosystems for startup-company creation and scaling across these four countries is laden with barriers. In particular, although these countries have taken steps to support entrepreneurs and their companies, helping startups to become scaleups, which are key drivers of job growth in MENA, is a lingering challenge.

For instance, the majority of surveyed companies have indicated plans to expand their operations beyond their home countries. Yet, key factors to scale such as building teams, obtaining investment, moving across borders and revenue generation are notable trials facing these companies. To better understand how ecosystems in these four countries have developed and how entrepreneurs can move beyond the startup stage and into scaling their companies, this report focuses on a sample of 494 companies surveyed across these four countries. It examines key developments in each country’s ecosystem, funding patterns for entrepreneurial ventures in recent years, the types of entrepreneurs trying to scale their businesses in each country and the pathways and challenges they face in achieving their goals for growth.

The full report is available here