Some private pools in Morocco’s tourism hot spots have banned women from wearing burkinis, sometimes described as halal swim-suits, which cover the body and have a head covering attached.

Several resorts in the touristic city of Marrakesh have reportedly banned the burkini in their private pools, with many citing “hygiene reasons,” according to local news reports.

Mazagan beach resort, located in al-Jadida which is south of the economic capital Casablanca, told Al Arabiya News that burkinis are not allowed to be worn in the resort and that only “ordinary swim-suits” are permissible.

Local news websites have published posters used by the management of private swimming pools to inform users that the burkini is not allowed. One posted in Morocco World News came in three languages and says “Burkini not allowed” and “Bathing suits mandatory.” 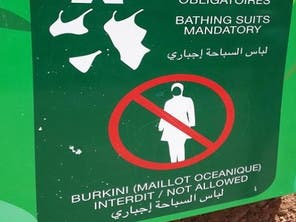 Poster that show that Burkinis are not allowed. (Photo courtesy: Morocco World News)

This is reportedly even the case if the burkini is made of special swimming material.

Abdelaziz Aftati, an MP of the ruling Moderate Islamist Justice and Development Party, sent a complaint to Tourism Minister Lahcen Haddad, after a woman wearing a burkini was reportedly banned from a swimming pool in al-Jadida, according to  Morocco World News.

Aftati told the press that it is unacceptable to restrict people’s freedom and their beliefs, saying the move signified the “rudeness of the new colonization.”

In 2009 in France, a 35-year-old convert to Islam threatened legal action after she was evicted from a public pool for wearing a “burkini.”