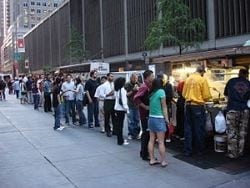 The Halal Guys, the innovative NYC-based American Halal street food concept, has announced the signing of a new franchise deal for Washington, D.C.

The new franchisee, who worked with Fransmart East Coast Sales VP, Ryan Durishin, has signed on to develop 10 units, representing the entirety of the total D.C. market available.

After having recently announced plans to franchise in a June edition of The New York Times, The Halal Guys are expanding internationally through a combination of company and franchise owned stores, starting with their first brick-and-mortar locations – 2 company restaurants located in home market New York City. They have also signed multi-unit franchise deals for Southern California, Houston, TX, and the Philippines.

Fransmart, the franchise development company behind the explosive growth of brands like Five Guys Burgers and Fries and Qdoba Mexican Grill, is partnering with The Halal Guys to expand the brand worldwide. Fransmart’s penetration plan will focus on top markets in North America, seeking real estate in mass gathering areas like airports, train stations, malls, and neighborhoods with a significant late night demand, as well as the Middle East.

Named to Time Magazine’s Top 10 Most Yelped Businesses of 2013, The Halal Guys has a fierce customer fan base with reviewer comments like: “Best Halal food in the world…” “This spot is legendary!!” “These guys ARE different” and “Amazing. A ‘must’ when in NYC.”

“This is a concept that will adapt to all markets everywhere,” said Fransmart CEO, Dan Rowe. “In 10 years I see this brand being synonymous with halal street food, all over the world.”