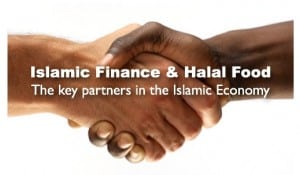 vited to present a paper at the International Islamic Finance Forum in Dubai. I was certainly not on the A list; a speaker had dropped out, and somehow my name came up as a last minute substitute. Choosing the topic Islamic Finance and Halal Food – Natural Allies, I put forward the concept that these two markets, both based on Shariah compliance, naturally formed the basis of a new integrated market arena with tremendous potential.

I got the impression that my ideas were met for the most part with blank stares, with the exception of the event organiser who reckoned this could be a great new conference idea! As someone later explained to me, to most Islamic bankers at that time, Halal simply referred to the chicken in the lunch buffet. Not a lot more.

Things have moved on since then, and the notion that Islamic Finance and the Halal food sector ‘belong together’ in a holistic rather than a circumstantial way, is starting to gain a bit of traction, not just on the conference circuit, but also at the tables where Big Decisions get made.

The notion that there might be real substance in such a thing as an Islamic Economy is taking root in various soils around the world. So it is no longer a question of if, but more a case of when, where and how. The warm moist soils of Southeast Asia, the decaying but still fertile compost of London or the arid but vitamin-enriched sand of Dubai. Time will tell…

Sheikh Mohammed bin Rashid’s announcement earlier this year that Dubai is repositioning itself as a centre of the Islamic Economy comes at an interesting time, and from an interesting place.

Malaysia was arguably in pole position on this track over the past decade. Already among the leaders in Islamic Finance, former PM Tun Abdullah Badawi picked up on the idea that Malaysia could be a ‘global Halal hub’.

What followed, from 2004 onwards, was a series of ground breaking initiatives for the Halal sector such as MIHAS the first Halal trade show, gathering the industry, then in 2005 the first World Halal Forum, gathering industry leaders, followed by the creation of the Malaysian government-owned Halal Industry Development Corporation. These three Halal initiatives opened up a new arena of ideas, conversations and plans that held the promise of actually becoming a real engine of growth for the newly named Halal industry.

However, to be a successful Halal or Islamic Economic hub, in real trading terms, geographic location is a key issue. For anywhere to succeed as a hub for the manufacture and trade of Halal products, there has to be access to raw materials, logistical convenience and direct access to consumer markets. In many respects, these were all very real challenges for the Malaysian initiative.

Dubai, on the other hand, is already a trading hub; dhows have plied these waters for centuries, and Jebel Ali stands as a testament to the foresight of Sheikh Rashid. It works. An enviable volume of raw materials and other goods flows in and out of Jebel Ali, giving the option to create down-stream value-added business opportunities for both global players and local SME’s.

Situated at the centre of the largest Halal food importing region in the world –$83 billion into the GCC alone – means that Dubai is a comparatively short series of steps away from being a genuine Halal food trading hub. Given the amount of resources – vision, land, money, labour – that Dubai can steer towards this initiative, the aim of positioning Dubai at the centre of the Halal market is not far-fetched.

As we look for clues as to what Sheikh Mohammed’s vision entails, another thought comes to mind. Part of Malaysia’s status in the Halal sector has been in the field of standards development and Halal certification. With standards from the Department of Standards Malaysia, an ISO member body, and certification conducted by JAKIM, the government’s religious authority, Malaysia’s Halal integrity has served as a benchmark for many years, even by producers who are not selling into that market. “We follow MS1500” and “We are JAKIM approved” are common statements from both producers and other certification bodies around the marketplace.

But consider this: if world-class standards were to emerge from within the GCC region, it would gain the full attention of food manufacturers all over the world.  Such standards would become not just a theoretical benchmark, but also an essential part of the real export process by providing access to a multi-billion dollar export market for all manner of Halal certified products.

With the current levels of fraud in the insufficiently regulated Halal export markets starting to be exposed, if Dubai were to become a centre for standards development, human resource development and training (where can you go to get Halal sector MBA…?), it could indeed position itself as a genuine hub for this new economic paradigm.

Furthermore, if Dubai can find a way to bring some of the excess liquidity in the Islamic Finance space into a Halal manufacturing sector that is thirsty for Shariah compliant investment, it will really turn the key to start up a new engine of growth. This would certainly act as a catalyst to create a new centre of gravity in the Islamic Economy.

Being in pole position has inherent risks. If you make an error of judgement, take the wrong turn, take your foot off the gas, or, God forbid, fall asleep at the wheel, there will always be someone over your shoulder who has seen all your moves and is ready to step up and overtake.

The next few laps promise to be interesting!

Abdalhamid Evans is the Editorial Director of the Global Islamic Economy Summit, 25-26 November, in Dubai