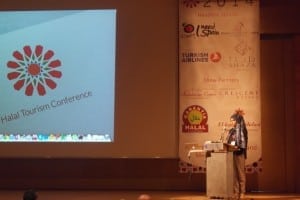 Last week Europe’s first conference on halal tourism took place in Granada, Spain. The brainchild of CM Media, the Halal Tourism Conference 2014 saw people from around the world gather to listen and learn about the Muslim market. Tourist boards, travel agents, tour operators, halal certification bodies and hotel managers made up most of the attendees.

What is halal tourism?

‘Halal’ is an Arabic word, which means permitted for Muslims. We generally associate ‘halal’ with food, but the word is used generically for all aspects of life with respect to what is lawful. Another way to describe halal tourism is ‘Muslim-friendly’. Research carried out by Dinar Standard showed that Muslims spent $137 billion on tourism in 2012 (not including pilgrimage to Saudi Arabia), with this figure expecting to reach $181 billion by 2020. There are many factors that are not specific to Muslims like price sensitivity for example but there are certainly trends that Muslim tourists from certain regions follow.

What requirements do Muslim travellers have that differ from other travellers?

Requirements depend on your culture and your lifestyle but what is halal and haram (not halal) remain consistent across the board regardless of your nationality. The most obvious need is adhering to a halal diet. This means only eating meat that has been slaughtered in the halal way. (Meaning that the animal is treated kindly in its lifetime and then slaughtered using Islamic principles.) Any derivatives of pig are not permissible. A halal diet also means not consuming alcohol, which is prohibited for Muslims. Where some Muslims don’t mind eating at a restaurant which serves alcohol, some may. In the same way, some Muslims don’t mind that pork is prepared in the same kitchen as halal meats, others might. ‘Halal hotels’ can be classified in this way if they include things like prayer facilities, separate swimming pools/beach areas for men and women (so women can comfortably swim and sunbathe) amongst other things. Research has shown that Muslims from the GCC (Gulf Corporation Countries) may spend more money on shopping where as Muslims from non- Muslim countries might be more interested in sightseeing.

Why are Muslims so demanding?

They’re actually not that demanding but sectors within the travel and tourism industry have recognised the increase in Muslim travellers and need to learn how to deal with and market to Muslim needs in order to gain their custom. A Muslim may be happy to book themselves into a resort on a half board basis in Thailand but if another resort in the same region is offering halal meat then chances are they would favour this resort. In the same way countries which didn’t cater to the Muslim travellers needs are now doing so. A good example is Japan, where visa requirements have been relaxed for travellers from Malaysia and Indonesia (the most populous Muslim country in the world). Japan is also holding the Japan Halal Expo 2014 in November to see how it can go further to address the needs of its visitors.

Why would I want to attract Muslims?

Why wouldn’t any business want to increase its client base? There are many ways to do this. One of the main strategies is to obtain halal certification. In many Muslim and non-Muslim countries there are organisations who are working hard to create a uniform halal certification system with different tiers. Adapting your business to attract more customers is a no- brainer for most businesses. The Muslim Travel Index launched by Mccann Reach showed out of the £21 billion spent by tourists in the UK in 2013, the biggest spenders were Muslim countries in the Middle East. Interestingly these countries don’t make the top 15 visitors to the UK as far as numbers are concerned. Tourists from the Middle East spent £179 per person per day amounting to £1.1billion for the year in the UK alone.

Who were the main players at the conference?

There are online booking systems like Halalbooking.com and Halaltrips.com that are at the forefront as far as booking Muslim-friendly holidays are concerned. There are organisations like Crescent Rating who advise businesses how to market and connect to the Muslim traveller. There are Shaza Hotels who are building a chain of luxury 5* hotels which serve halal food and no alcohol, have separate swimming facilities and prayer rooms as well as many other extras. In terms of destinations, Malaysia unsurprisingly is at the forefront of halal tourism with many halal hotels and restaurants as well as mosques, cultural festivals, shopping and beaches. Malaysia is also politically stable and has copious amounts of natural beauty which plays a big role in attracting the Muslim tourist.

Where can I find a ‘halal hotel’?

‘Halal hotels’ can be found everywhere but it’s important to keep in mind that there are varying levels of halal. Alanda hotel in Malaga has become a ‘halal hotel’ after recognising the gap in the market. The manager has not only created separate swimming pools for each gender but also stopped selling alcohol and become a dry hotel. A dry hotel in Costa Del Sol is pretty unique but according to the manager of the hotel they’ve had a great summer season.
Turkey has many hotels that classify themselves as halal. Other hotels may be halal certified but this doesn’t mean that they don’t serve alcohol. It is up to the consumer to look into what a ‘halal’ hotel offers.

Is this a way of alienating non-Muslims?

Not at all. There are many non Muslim families who go to dry hotels as they don’t want their children to have access to alcohol or to see drunk guests hanging around the hotel. As well as this a lot of business conferences are held at dry hotels as not only does it cost less but companies know their employees will be sober the next morning. Also the majority of hotels with segregated swimming areas also have mixed pools and beaches for those who want to use them. As well as this even if a business doesn’t become halal certified, there are many ways of being Muslim-friendly as well as keeping your current customer base. Luxury hotel Aleksandra Hotel in Slovenia found that a simple gesture like removing alcohol from the mini bar for a Kuwaiti customer and substituting it with local chocolate not only made the customer feel special but it increased their revenue substantially as it turned out Kuwaitis love chocolate! This is a small example but the case is strong.

Why did the conference take place in Granada?

Granada was the last stronghold of the Muslim rule in Spain. Muslims or the Moors as they are referred to ruled over Granada until 1492, over 700 years from the first conquest in 711 AD. From Alhambra Palace to Albaicin, the legacy of the Muslim rule is easy to spot in the architecture and culture. One of the show partners at the conference Andalucian Routes, run specific tours showcasing the best of Andalucia, highlighting the Islamic heritage and providing visits to restaurants where food is halal or at least where there is a good vegetarian/seafood selection. For Spain tourism is a way to gain ‘convivencia’ which is Spanish for coexisting peacefully. The Granada Tourist Board realise Muslims are drawn towards Andalucia and are extremely welcoming towards all nationalities.

Where are all these Muslims coming from?

Travelling has become easier and affordable for all sections of society, it naturally follows that more Muslims will be travelling and holidaying than before. An important factor to remember is that Muslims from the 57 OIC (member states of the Organisation of Islamic Cooperation) countries and Muslims in minority Muslim countries make up a young demographic. Key Muslim majority countries like Malaysia, Indonesia and Turkey have growing economies with GDP increasing each year. With a global population of 1.8 billion Muslims, the market is huge and the potential is there for businesses to take advantage of it. Even Kuoni are taking advantage as their representative made a very good point at the conference, ‘Kuoni is not niche, and neither is the Muslim market’.