By Fuad Nahdi for theguardian.com

Today I’ll be the first Muslim to address the General Synod of the Church of England. It is a blessing and an honour, and I am humbled by this historic opportunity. But the journey from Noor Mosque in my native Mombasa, Kenya, to Church House has been a long and meandering one – full of trials and adventure, but ultimately worth it.

A couple of days ago, Humera, my wife of more than 25 years, asked what would make me consider my life a success. Recovering from a long bout of debilitating illness, I was trying to figure out what would be the best way to pursue the new lease of life that had been granted to me.

“If I can, somehow be involved in reconciling hearts and people. That would make me happy,” I replied.

Many moons spent in NHS wards, surrounded by diversity, suffering and death, not escaping to a zawiyah (monastery) retreat, made me spiritually mature and responsive. With plenty of time on my hands I embarked on a journey of rediscovering my faith and what it meant for our times.

Among the jewels I came across was a hadith (narration) of Muhammad, the prophet of Islam, peace and blessings be upon him, which simply said: “Shall I not inform you of a better act than fasting, alms and prayers? Making peace between one another: enmity and malice tear up heavenly rewards by the roots.”

It is a message that all members of the synod would be familiar with, for it echoes Matthew 5:9: “Blessed are the peacemakers for they shall be called the children of God.”

Violence has no religion, ethnicity or morality: if anything it reflects a betrayal of our basic humanity, for in violence we forget who we are. What surrounds us is beyond comprehension and puts all of us to shame. For people of faith and principles, this is a time for introspection and deep reflection.

We must never forget that life has not always been like this, and have faith that we can stop the tide. To do this, we need to stand firm and form an alliance of virtue that will combat and deal justly with the root causes of the problems, not their symptoms. We must be convinced that the issue is not too much religion, but too little good religion. And the criminals out there need to be perceived and treated just like other criminals.

The task is awesome, but we should not be afraid of our duty to be bridge-builders and peacemakers. To do this effectively, we should dig deep in the teachings of our faiths on justice, compassion, courage, patience and respect.

Our interdependent existence must be at the back of our minds, at all time. Soon, two out of every three members of the church will have a Muslim neighbour. The need to educate our flocks on the proprieties of co-existence and the embracing of difference is a top priority.

But perhaps the biggest challenge for all of us Christians and Muslims is to change basic attitudes so that they reflect the complex world in which we live.

Both Christianity and Islam need to be detribalised in the global village. Our efforts should focus on finding areas of convergence, not conversion.

We must be brave and speak truth to power. Otherwise, we will lack the legitimacy to firefight the righteous anger that is consuming whole communities caught up in conflict. We must call for an end to war or violent conflict of any kind.

My presence in the synod will help us to stand shoulder to shoulder together against the forces that would threaten our shared humanity. For the haters and those consumed by anger and wickedness, this occasion is both threatening and unsettling. Many would not want us to share the truth about the rich history of Christianity and Islam.

For centuries the two faith communities have managed to co-exist peacefully in almost all countries in the Middle East and elsewhere. Islam has recognised Christianity as a sister Abrahamic faith. Places of worship have been respected, freedom of worship accorded and lives and property protected. The oldest known Christian community that speaks the language Jesus allegedly spoke has co-existed with Muslim neighbours until the recent troubles.

A covenant signed by the prophet Muhammad, peace and blessings be upon him, with Christians from St Catherine in Mount Sinai, said: “This is a message from Muhammad ibn Abdullah, as a covenant to those who adopt Christianity – near and far, we are with them. Verily I, the servants, the helpers and my followers defend because Christians are my citizens: and by God I hold out against anything that displeases them. No compulsion is to be on them. Neither are their judges to be removed from their jobs nor their monks from their monasteries. No one is to destroy a house of their religion, to damage it, or to carry anything from it to the Muslims’ houses. Should anyone take any of these, he would spoil God’s covenant and disobey His prophet. Verily, they are my allies and have my secure charter against all that they hate. No one is to force them to travel or oblige them to fight. The Muslims are to fight for them. If a female Christian is married to a Muslim, it is not to take place without her approval. She is not to be prevented from visiting her church to pray. Their churches are declared to be protected. They are neither to be prevented from repairing them nor the sacredness of their covenants. No one of the nation (Muslims) is to disobey the covenant until the last day (end of the world).”

I will enter the synod the way I would have entered the house of Jesus of Nazareth – in awe and wonderment seeking brotherhood and understanding. My lips, however, will be repeating the prayer of Moses: “My Lord, I ask you to expand my breast, make my task easy, undo the knot in my tongue so that my speech will become comprehensible.”

Finally, the words of the noble prophet should be assuring for all: “Beware,” he warned over 14 centuries ago, “whoever is cruel and hard on a non-Muslim minority, or curtails their rights, or burdens them with more than they can bear, or takes anything from them against their free will; I (Muhammad) will complain against the person on the day of judgment.”

Church of England general synod to be addressed by Muslim 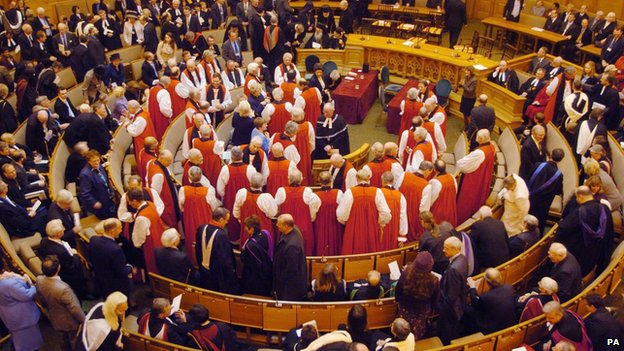 The synod will discuss threats against religious minority groups next month

A Muslim speaker is to address the Church of England’s general synod for what is thought to be the first time.

Activist and journalist Fuad Nahdi will take part in an event looking at the conflicts in Iraq and Syria.

He will join a panel exploring the “unspeakable evil” religious minority groups have faced in the countries.

Synod general secretary William Fittall said he believed the event next month would be the first time a non-Christian had addressed the assembly.

“We have certainly had people from other faiths in the gallery who have been greeted by the synod, who have been welcomed,” he added.

The panel will also feature the leader of the Coptic Christian Church in the UK, Bishop Angaelos, alongside the Bishops of Coventry and Leeds.

A report produced for the synod discussion says Christians have been attacked by Islamic State (IS) fighters in Iraq with a “narrow religious ideology”, alongside Yazidis, Alawites and other Shia Muslims.

It also accused Syrian President Bashar al-Assad of carrying out atrocities against his country’s Sunni population.

It adds: “The boundaries in this struggle are blurred and fluid. Not surprisingly religious minorities can be found on opposing sides of conflicts that have caused untold human suffering for all.”

The discussion will take place on 18 November.