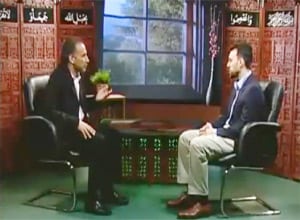 Transcript of part of an interview conducted by Dr. Tariq Ramadan withTariq El-Diwany, author, consultant and a contributing editor of the book “Islamic Banking and Finance: What It Is And What It Could Be” in the weekly TV program “Islam and Life.”

In the interview, Tariq El-Diwany explains how can Muslims conduct business ethically in today’s world.

The current global malaise is mainly a result of unethical business practices.

A tidal wave of interest-accruing credit was unleashed on US home owners creating a profit bubble that burst asunder and caused what came to be known as the credit crunch, not Halal.

So today is a good time to explore what a true Islamic business ethics could look like.

With a host of chief executives and CEOs paying themselves record amounts, does Islam have anything to say about how much people should be paid?

Also, what should we be trying to achieve when doing business: To make as much money as possible? To create something that benefits society? Or to worship Allah?

Around 50% of British Gross Domestic Product stems from business practices prohibited by Islam, and in the US the financial sector accounts for over a third of all corporate profits.

So how far can an Islamic business ethics be reached in an economic order when not even the basics of Shari`ah law are in place?

This week Islam and Life asks: How can Muslims conduct business ethically in today’s world.

So what is really what we call Islamic ethics in business or in finance, or Islamic finance or Islamic business. Is there something which is specific? How can we define this?

Tariq Ramadan: So from around the world we listen and we hear Muslim scholars, intellectuals and businessmen being involved in the world of business, training, management, finance and economy. They are talking about Islamic economy, Islamic finance, Islamic business and ethical business as well.

And then what is happening now around the world when we hear about this happening in the States, in Europe and in many countries around the world, in Muslim majority countries as well, where we have people dealing with this. What is done? And in which way could it be improved, not only for Muslims to feel well with what is done in the name of Islam but also as a contribution and an added value to the practices that we have in non-Muslim countries for example and with non-Muslim businesses?

So is there something that we can contribute? And in which way can this contribution be done and promoted?

Well, to answer this question I’m joined by the author and consultant Tariq El-Diwany. Tariq is the contributing editor of a new book “Islamic Banking and Finance: What It Is And What It Could Be”.

Thank you Tariq for being with us. You heard about all these questions, and there is something which is a very specific field where we don’t always have a clear Islamic answer. So in which way would you yourself, because you are in the field of finance and businesses as well, define what we call Islamic ethics in business or Islamic business?

Is there something which is specific in the way Muslims are dealing with it?

Tariq Ramadan: Before coming to this, you know very often when I speak with people I say you know we have Islamic ethics in business, and we have practitioners or people who are specialists in the field that are trying to do something which is faithful to Islamic principles. And it’s the same in finance and it’s the same in economy. Many people are saying “Oh, do you mean that there is something which is specific way to deal with business? What do you mean by this?” This is the starting point for people to understand what we mean by that.

Tariq El-Diwany: Well, I think the starting point is the purpose. What are we doing business for? What are we living for?

When I was at university, I studied economics, accounting and finance, and we were taught the purpose of business life was to maximize shareholder’s value, to maximize profits. And actually that’s a value judgment of a kind, and you find value judgments in religion. In Islam the value judgment for us is that the purpose of life is to worship Allah. So there is your first very major difference. Now if you worship Allah, you have got a very different set of priorities and principles and values driving you compared to the chief executive officer who is looking to maximize the profits of his company.

So the very essence of what we also had in the very classical Islamic tradition when we spoke about al-maqasid, what are objectives that we are trying to reach, and then setting this as something which is the priorities, and then inductively we come to how do we manage this? Are we faithful to these objectives with our Islamic teachings?

The point is that you said a second thing which is if you don’t want only to maximize the profits, and some people are saying “OK to be faithful to the Islamic way, you should maybe get less profit.” So is this the point? Because at the same time what we have and what I heard from sometimes Muslims is also “No, we want exactly the same profit, the same benefits but with Islamic ethics”.

Tariq El-Diwany: Yes, I mean that’s a false choice saying that you must not make too much profit. You can make as much profit you like in Islam as long as you are not cheating people, deceiving them in some way and practicing something prohibited like usury for example or gambling or selling prohibited items. You can make as much profit as you like, but then there is a condition on that, and the conditions are you have to pay Zakah for example.

Then there is Ihsan, the excellence of giving charity from your profits, then this is not compulsory, but it’s recommended. So we have conditions and we have the excellence of behavior. Let’s say that’s in Islam balances the profit motive. So, if we get into a little bit more details, then yes Islam accepts self-interest as a motivating factor. Islam has rules like any other legislative system has rules. I mean it’s not implemented these days in many places but we do have Islamic Law and its rules to follow. So that’s in addition to self-interest, and then there is the excellence of a behavior that we want to give charity that we want to help others without making any profit just fi sabil illah (For the sake of God).

Tariq Ramadan: Is it the only specificity that you get here?