Debate over Islam and hip hop in Europe is heating up as governments wade in.

By Hishaam Aidi: editor of Black Routes to Islam and a fellow at the Open Society Foundation in New York. He is also a lecturer at Columbia University’s School of International and Public Affairs.

York, NY – Three months ago, just as the French presidential campaign was heating up, the rapper Kery James uploaded a track titled “Letter to the Republic” (“Lettre à la République“) explaining what he and youth in the banlieues thought of the republic’s political class, or as he described them, “Pillagers of wealth, murderers of Africans, torturers of Algerians / The colonial past is yours, you chose to link your history to ours.”

The track promptly provoked public outrage; the far-right group, Le Bloc Identitaire, tried to cancel James’ concert tour, its spokesperson calling on the rapper – a Guadeloupe-born convert – to leave France and move to a “Muslim land”.

Meanwhile, in Germany, state officials are trying to indict former rapper Deso Dogg – another convert – for his lyrics which allegedly inspired a 21-year old Kosovar to fire at a busload of American servicemen in Frankfurt.

The debate over hip hop, Europe’s dominant youth culture, stands in for a much larger debate about race, immigration and national identity. With many of the biggest stars being Muslim, the disputes over which Muslim hip hop artists are “moderate” or “radical” are also disagreements over what kind of Islam to allow into the public space. As European state officials decide what “hip hop policy” to adopt, American embassies on the continent have slowly inserted themselves into this delicate dance between European governments and their hip hop counter-publics.

Hip hop is at the heart of US embassies’ outreach to Muslim communities. Farah Pandith, the State Department’s special representative to Muslim communities, has argued that hip hop can convey a “different narrative” to counter the foreign “violent ideology” that youth are exposed to. American rap artists are invited to perform at embassies in Europe. Local artists are invited to the embassy. The US ambassador to France has sponsored hip hop conferences, inviting French rappers to his residence, including the controversial K.ommando Toxik (who, at the US embassy, performed a tribute to two boys who were killed by the French police in November 2007, an incident that triggered a wave of riots).

This debate over hip hop is playing out most poignantly in France, the country with the largest Muslim community in Europe, the second largest hip hop market in the world and a place whose traditions of laïcité (secularism) aggressively restrict expressions of religion in the public sphere.

After the French riots of 2005, French MPs called on the government to prosecute seven rap groups whose lyrics hadallegedly incited youth to violence. The artists were acquitted, but the French government began investing more heavily in hip hop – at the local and national level, sponsoring concerts and funding local institutions in troubled neighbourhoods – in an effort to recognise marginalised cultures and identities, but also to foster a hip hop conducive to integration.

It’s not clear, however, what kind of hip hop best aids integration, and which rappers to invite to the Grand Palais. Successful hip hop artists rarely appreciate being held up by politicians as models of successful integration, often because government validation separates them from their base – and creates tension between rappers approved by the state and those who are not. Precisely this process is occurring in France, as seen in the interplay between Abd Al Malik and Médine. 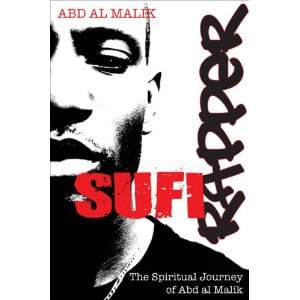 Probably the most celebrated French hip hop artist of the last decade is French-Congolese rapper Abd Al Malik. A former street hustler raised in a housing project outside of Strasbourg, he embraced Islam as a teenager, joining the Islamist Tablighi Jama’at. He achieved some notoriety with his rap group New African Poets, before embracing Sufism and shifting from gangsta rap to spoken word poetry (le slam). Malik’s poetry, accompanied by riffs of jazz and la chanson française, speaks of the value of hard work, education and the power of “spirituality”.

In his music and his autobiography, May Allah Bless France (Qu’Allah benisse la France), Malik extols the Republic’s values – liberté, egalité, fraternité – saying they should be reinvigorated. Malik has won all kinds of artistic and non-artistic plaudits; he is raved about by elites as a Muslim role model and a symbol of a new multicultural France. In January 2008, the Ministry of Culture awarded Malik the Chevalier des Arts et des Lettres, one of France’s most prestigious cultural honours.

As hip hop gains public acceptance and rises to the level of high culture, French cultural and political elites are carefully monitoring the kind of Islam that is being diffused over the rap airwaves, and Malik’s music embodies the kind of Islamic piety that can be permitted into the French public square.

If Malik’s music makes no political demands, his would-be rival, Médine, a popular “undergound” hip hop artist, hits all the issues that the Sufi poet evades: the social exclusion of nonwhite French youth, conditions in the banlieues and Western depredations in the Third World. Sporting a bald dome and fierce beard, Médine raps in harsh, halting tones over hard-core instrumentals, about colonialism, Malcolm X, Afghanistan, the PATRIOT Act, police brutality and segregation. His videos show graphic images of war, street protests and water-boarding. His critiques of the French model of integration are blunt and forceful, the gist being that France’s urban crisis must be understood in light of the country’s colonial past and Western imperialism in general.

The more overtly pious Malik is celebrated, in part because he declares his love for the Republic, sees Islamic identity as compatible with the Republic’s values and, while he refers to the country’s colonial past, is not enraged at the French state. Médine, on the other hand, is not particularly vocal about his own religiosity, speaking more about rights for Muslims. Yet, ironically, the mainstream media has largely ignored him, and some radio stations boycott him, saying he promotes Muslim identity politics (communautarisme).

French director Keira Maameri’s recently released documentary “Don’t Panik” – screened a few weeks ago at the Al Jazeera International Documentary Film Festival in Doha – offers Médine and five other rappers (from Sweden to Senegal) an opportunity tell their side of the story, and to reflect on how they are viewed as Muslim hip hop artists. “My track ‘Don’t Panik’ aims to bring communities together,” says Médine, referring to what has now become his signature track where he announces his multiple identities (ghetto-dweller, proletarian, Muslim, African) while telling listeners to stay calm. “[The song] denounces discrimination against youth in housing projects, the working class, Africans – and Muslims. Yet what do people remember? Muslims – that’s the only thing they remember.”

The artists are interviewed – in between clips of performances on stage, or in their home countries – and seem keenly aware that what they say on-stage will reflect on the entire Muslim community, that a passing reference to Islam could get them labelled “proselytisers” or extremists. The Senegalese artist Duggy Tee thinks subtlety and understatement are the way to go, “If one listens to my lyrics carefully, one can see that I believe in God, but my faith in God is not something I want to put forward and promote through my lyrics.”

The artists also ponder their responsibilities as Muslim artists, how they can reinvigorate hip hop, or create a new politics. “There has to be an alternative,” says Manza, a Belgian artist, to the “bling bling” and the thongs, calling for “a rap that protests, takes a stand, opens up debate and brings something new”.

Given the anxieties surrounding the Islam-hip hop connection in Europe today, fans, activists and state officials should keep an eye out for this stimulating documentary.

Hishaam Aidi is editor, with Manning Marable, of Black Routes to Islam (Palgrave Macmillan 2009), and a fellow at the Open Society Foundation in New York. For more on hip hop and Muslims in Europe, please see this longer study by Dr Aidi.

The views expressed in this article are the author’s own and do not necessarily reflect Al Jazeera’s editorial policy.