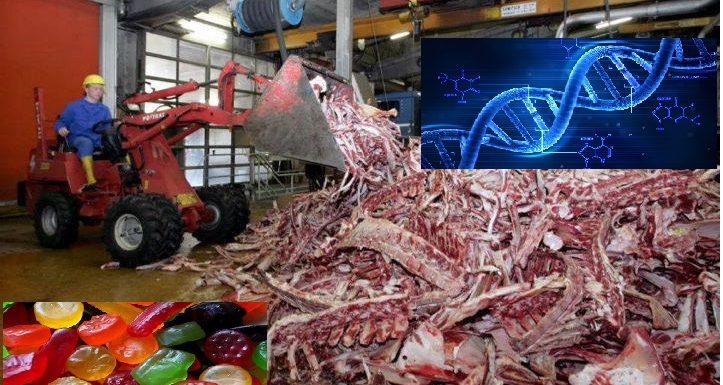 Muslims community represents about 30% or about 2 billion of the world population. The majority of Muslims are from Asia Pacific which represent 70% and Middle-East, 20%. These numbers are expecting to increase 2.7 billion in 2030. This means that the demand for halal products will be increased.

Food industry is one of the main concerns in Muslims community. The rapid development in food technology results the emergence of various food products and food ingredients in market. Many food ingredients are produced from doubtful sources. In addition, lack of awareness from Muslim consumers might lead to the difficulties in choosing purely halal food products in market. One of the most controversial issues in food industry in Muslims world is gelatin based food products.

Gelatin is a mixture of peptides and proteins produced by partial hydrolysis of collagen extracted from the skin, bones, and connective tissues of animals such as domesticated cattle, chicken, pigs, and fish.

Gelatin, one of the most popular biopolymers, is widely used in food, pharmaceutical, cosmetic, and photographic applications because of its unique functional and technological properties. In food industry gelatin is utilized in confections (mainly for providing chewiness, texture, and foam stabilization), low-fat spreads (to provide creaminess, fat reduction, and mouthfeel), dairy (to provide stabilization and texturization), baked goods (to provide emulsi?cation, gelling, and stabilization), and meat products (to provide water-binding) (Johnston-Banks, 1990; Schrieber & Gareis, 2007).

The global demand for gelatin has been increasing over years. Recent report indicate the annual world out-put of gelatin is nearly 326,000 tons, with pig skin derived gelatin accounting for the highest (46%), followed by bovine hides (29.4%), bones (23.1%) and other sources (1.5%) (Karim and Bhatt, 2009). In Europe, about 80% of edible gelatin is produced from pig skin (Boran and Regenstein, 2010).

Islam forbade it followers to consume haram and doubtful foods. It is stated in Al-Quran:

(Forbidden to you (for food) are: dead meat, blood, the flesh of swine, and that on which hath been invoked the name of other than Allah. that which hath been killed by strangling, or by a violent blow, or by a headlong fall, or by being gored to death; that which hath been (partly) eaten by a wild animal; unless ye are able to slaughter it (in due form); that which is sacrificed on stone (altars); (forbidden) also is the division (of meat) by raffling with arrows: that is impiety). (Al-Maidah, 5:3)

Generally, Muslim jurist agreed that gelatin derived from slaughtered and permitted animals is halal. However, there is argument on gelatin that is derived from pig and carrion. The halal and haram sources of this matter have been debated among Muslim jurists. Some of them agreed that gelatin extracted from the prohibited sources is haram. Whereas the other opinion supported the idea that gelatin from haram sources is halal because it does already undergo Transformation (Istihalah) process (Hammad, 2004).

Istihalah, from the Fiqh point of view, is defined as “changing the nature of the defiled or forbidden substance to produce a different substance in name, properties and characteristics. Istihalah also can be defined as a complete transformation occurred physically and chemically (Aizat & Radzi, 2009).

Dr. Hamed jami mentioned in the 9th medical fiqh Symposium about the criteria of transformation, and he said: the transformation criteria from Islam point of view mean the complete conversion of the material nature, and so all its nature, characteristics and properties must convert, and so the transformed material must be not similar to the original material, and it must has new independent nature, another characteristics, and new name.

If we take the most famous example about transformation, which is transformation of wine (ethanol) to vinegar (acetic acid), we can notice that the original material (ethanol) belongs to alcohols group, but the transformed material (acetic acid) belongs to acids group. This mean there is complete conversion in physical and chemical properties, and there is change of the material nature to new nature, and it is not only conversion of characteristics.

Can we consider the conversion of collagen into gelatin is transformation?!!

Actually, what happened to collagen is changing in some its chemical and physical properties and it is not transformation, and the principle of transformation did not achieved here, and we will explain that in details.

There are two basic types of gelatin:

Gelatin type A: The raw material (mostly pig skin) is subjected to a 24-h conditioning process. This involves treatment with acid. After this, the gelatin can be extracted.

Gelatin type B: The raw material (either ossein or bovine hide) is subjected to several weeks of treatment with alkali. The collagen then become soft can be extracted using warm water.

The manufacturing processes of gelatin consist of three main stages:

1-Pretreatments: to make the raw materials ready for the main extraction step and to remove impurities which may have negative effects on physio chemical properties of the final gelatin product,

2-Extraction: The main extraction step which is usually done with hot water or dilute acid solutions as a multi-stage extraction to hydrolyze collagen into gelatin, and finally,

3- Refining and recovery: The refining and recovering treatments including filtration, clarification, evaporation, sterilization, drying, rutting, grinding, and sifting to remove the water from the gelatin solution, to blend the gelatin extracted, and to obtain dried, blended and ground final product.

For more understanding of protein we should know the protein structure:

Primary structure: comes from the sequence of amino acids in polypeptides. This sequence responsible for distinguish protein from another, and responsible for determining general and physical properties of the protein.

Tertiary structure is the final specific geometric shape that a protein assumes. This final shape is determined by a variety of bonding interactions between the “side chains” on the amino acids proteins fold into one or more specific spatial conformations.

Conversion of collagen into soluble gelatin is due to the cleavage of a number of intra- and intermolecular cross-linking bonds in collagen. As a result, the gelatin obtained generally has molecular weights lower than native collagen (Asghar & Henrickson, 1982). Insoluble native collagen must be pre-treated before it can be converted into a form suitable for extraction, which is normally done by heating in water at temperatures higher than 45°C. A chemical pre-treatment will break non-covalent bonds so as to disorganize the protein structure, thus producing adequate swelling and collagen solubilization (Stainsby, 1987). Subsequent heat treatment cleaves the hydrogen and covalent bonds to destabilize the triple-helix, resulting in helix-to-coil transition and conversion into soluble gelatin. (Djabourov, Lechaire, & Gaill, 1993; Gomez-Guillen et al., 2002).

The difference between collagen and gelatin

Collagen molecules are composed of three ?-chains intertwined in the so-called collagen triple-helix. This particular structure, which mainly stabilized by intra- and inter-chain hydrogen bonding, is the product of an almost continuous repeating of the Gly-X-Y- sequence, where X is mostly proline and Y is mostly hydroxiproline. (Asghar & Henrickson, 1982).

The chemical properties of gelatin are affected by amino acid composition, which is similar to that of the parent collagen, thus influence by animal’s species and type of tissues (Zhou and Regenstein, 2006).

As a result, the argument which claims that Istihalah process occurred on gelatin after undergo conversion process cannot be accepted, and according to the Juristic rule: “Certainty may not be disproved by doubt”. Since the pork, carrion and their parts are Najis (unclean), therefore gelatin extracted from pig and carrion is unclean and not allowed to use it in food and cosmetics.