Before I genuinely began to cultivate and nurture my relationship with God, I regarded the five daily prayers that Islam enjoins on believers as laborious. It seemed impractical to expect that I would be able to stop what I was doing during my busy work schedule to take time out and pray.

Working as a news wire journalist, I was often spending upwards of 10 hours a day in the office or at conferences, interviews and meetings, barely able to make time for a lunch break. If I wasn’t working, my time was divided between house chores, errands, family and friends, and exercise. I was punctual with everything in my life, except that I was late five times a day.

In my mind, it was not viable to expect that I could wake up before the crack of dawn to pray the early-morning prayer, fajr, otherwise I would be too tired to work effectively later that morning. It also seemed inefficient to interrupt my work meetings to pray duhr, the mid-day prayer, and asr, the afternoon prayer.

Making the sunset prayer maghrib was often a challenge because the window to pray is typically quite short and coincides with the time between finishing work, having dinner and returning home. So, in effect, the only prayer that was feasible for me to pray on time was isha, the evening prayer. For most of my life, thus, I would at best pray all five prayers in the evening, or skip prayers here and there to accommodate my immediate commitments. 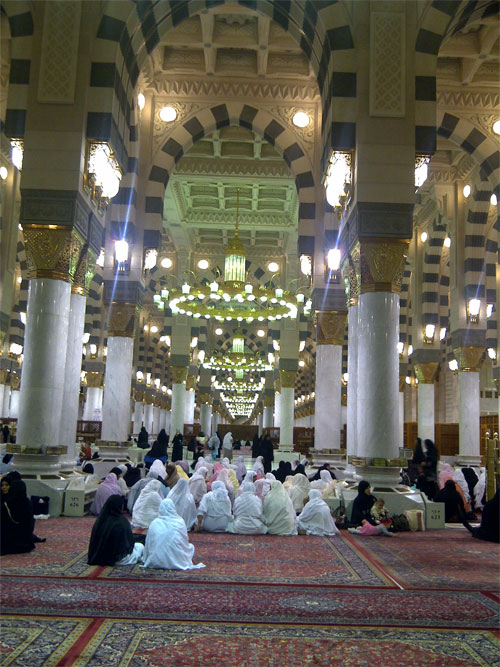 Without realising it, my inconsistency and approach to praying trivialised the principle behind performing prayers throughout the day. I believed in God and loved Him, but on my own terms, not on the terms very clearly set out in the Quran and Prophetic teachings. Yet praying the five daily prayers, at their prescribed times, is the backbone of being a Muslim; we cannot stand upright in our faith without them. It is one of the essential practices that God has called on those who endeavour to live in Islam, a state of existence whereby a human strives to live in submission to God.

When I came to truly understand the importance of prayer, the realisation was both overwhelming and quick. It dawned on me that if I was not fulfilling this precondition, then I really could not claim to be Muslim. Even if I desired to have a solid connection with the Almighty I was not taking the necessary steps to do so. I promptly reoriented my life and it has now been a year and a half that I have not intentionally missed a prayer time, whether I am in the office, mall, grocery store, out with friends or travelling.

Looking back, I see how wrong I was about the impracticality of Islamic prayers, which are succinct and straightforward notwithstanding their resonance. When I moved from trying to fit prayers into my life to fitting my life around my prayer schedule, I instantly removed a great deal of clutter from my daily routine. Since regular prayer promotes emotional consistency and tranquillity, I began to eliminate excess negativity and cut down on unnecessary chitchat, helping me be more focused, productive and patient.

Over a short period of time, what amazed me was how easy and fluid the prayers became. Performing the early-morning prayer actually gave me a burst of energy during the day and, gradually, the prayers that I had initially perceived as cumbersome became an essential facet of my routine. With God’s help, I would find ways to make a prayer regardless of the hurdles. While in Canada for the summer, I would often catch duhr prayer in a department store fitting room, with the help of a handy Islamic prayer compass application on my Iphone.

“‘Verily the soul becomes accustomed to what you accustom it to.’ That is to say: what you at first burden the soul with becomes nature to it in the end.”

This is a line drawn from a magnificent book I am in the process of reading by great Islamic thinker Al-Ghazali, entitled “Invocations and Supplications: Book IX of the Revival of Religious Sciences.” Al-Ghazali describes a series of formulas, drawn from the Qur’an and Hadith, which we can repeat to help us attain greater proximity to the divine and purify our hearts. 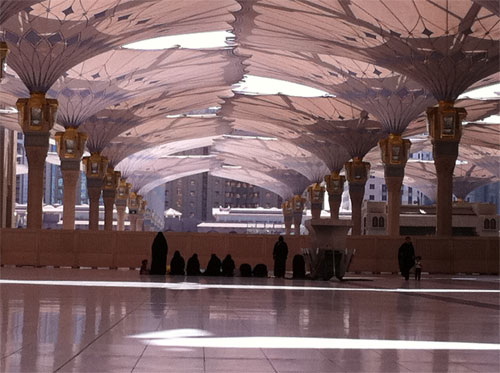 Women gather for prayer outside the Prophet’s Mosque in Medina, Mandy Merzaban photo

At each turn in my quest to enrich my faith, I have found that what at first appears difficult becomes easy when performed with sincerity. Soon after I reoriented my life to revolve around prayer, the five prayers felt insufficient in expressing my devotion. I examined Hadith, or the traditions of Prophet Muhammad, peace and blessings be upon him, and discovered there were optional prayers I could add to my routine. Since then, I have not let a day pass without praying them.

To supplement my prayers, I have integrated various zikr, or remembrance and mentioning of God, into my days. Zikr, including repeating such phrases as “la illa ha il Allah” (There is no God but God), habitually draws our attention back to God.

Among the many rich invocations mentioned in Ghazali’s book is this one which I have started to incorporate. As we leave our houses each day, if we say “In the name of God” (Bismillah), God will guide us; when we add “I trust in God” (Tawakalt al Allah), God will protect us; and if we conclude with “There is no might or power save with God” (La hawla wa la quwwata illa billah), God will guard us.

I suppose to an outsider, these acts of devotion can appear a bit obsessive, and I have had a couple of people say this to me. Yet it is an obsession with the greatest possible consequences that can improve rather than disintegrate one’s disposition. The more time I devote to God, the greater the peace of mind I find filling my life and the more focused I become on what is important — such as treating my family and friends honourably, working hard in my job, giving charity with compassion and generosity, and maintaining integrity.

Remembering God throughout the day, through prayer and invocation, truly does polish the heart as Hadith teaches; you erase obstructions that would impede faith in its purest form.