By A N Wilson, Mail Online

Raw with grief, in a voice steady but tight with emotion, his appeal for calm on Wednesday was a beacon of hope amid the tumult and carnage of a horribly dark week for Britain.

Hours before he spoke, Tariq Jahan had lost his 21-year-old son Haroon, murdered in the Winson Green area of Birmingham by thugs who drove at him in their car in what appears to have been a racist attack.

No one could be more aware of the simmering racial tensions between Asians in his neighbourhood and those of Caribbean ancestry. 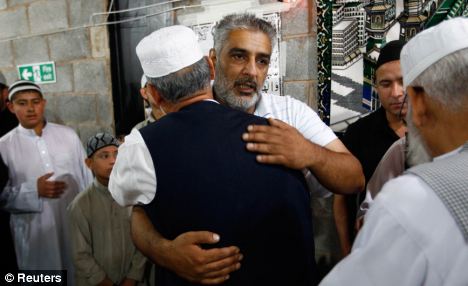 Faith: Tariq Jahan is embraced by members of his community after Friday prayers at the Dudley Road mosque in Birmingham

Yet Mr Jahan had the dignity, the compassion and the common sense to demand an end to the violence that had shattered his life. ‘Blacks, Asians, whites — we all live in the same community,’ he said. ‘Why do we have to kill one another? Why are we doing this? Step forward if you want to lose your sons. Otherwise, calm down and go home — please.’

There was no mention of feral rats or of the sickness in our society. There were no calls for revenge. If he had screamed for retribution, if he had chosen the emotional occasion of his son’s death to denounce whole swathes of the community, there could easily have been an unspeakable outbreak of racial violence. 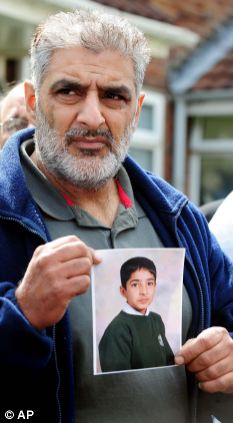 Father: Tariq Jahan holds a picture of his son Haroon as a schoolboy

Instead, Mr Jahan made an open and straightforward declaration of his faith. ‘I’m a Muslim. I believe in divine fate and destiny, and it was his destiny and his fate, and now he’s gone,’ he said. ‘And may Allah forgive him and bless him.’

It was a solemn, peaceful message that will make everyone who stereotypes Muslims as terrorists and fanatics feel ashamed of themselves. Tariq Jahan is a deeply impressive man, and like the great majority of Muslims in this country, he is hard-working, clean-living, guided in his conduct by religious belief, and unshakeable in his devotion to the ideal of family life.

In London at the height of the riots, we saw another clear expression of faith when more than 700 Sikhs lined up to defend their temples from potential arsonists in the suburb of Southall to the west of the capital. The Sikhs have a proud tradition of valuing each human being, male and female, as equal in God’s eyes. Theirs is a religion in which family is paramount.

We do not know the size of the bank balance of those Sikhs, any more than we know how wealthy are the Muslims of Winson Green. From looking at the streets and houses where they live, and the shops where they buy their food, it is safe to assume that they are not rich.

It is probable, too, that their teenagers would like to have large-screen televisions and fashionable trainers and BlackBerries.

But you can pretty well guarantee they would not have been among the looters. 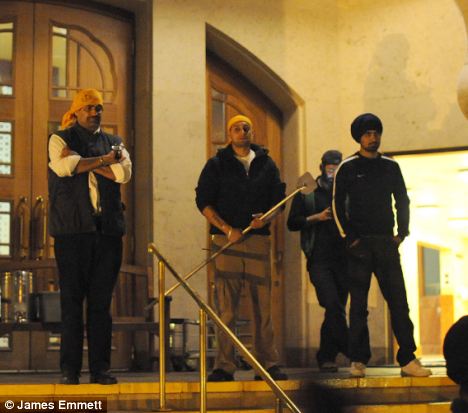 Self-defence: Sikhs outside the Sri Guru Singh Sabha temple in Southall this week

Instilled into them would have been the importance of working hard for money to buy these things, rather than hurling a brick through a shop window to help themselves.

Paramount among their moral values would be concern for others, a sense of altruism that could not be more different from the sense of self-entitlement that been so grotesquely on display this week. The reason for this is that they are from religious families.

All the main religions are unshakeable when it comes to self-evident truths about right and wrong; about stealing, harming others, coveting goods, instant gratification and so on.

‘Two things fill the mind with ever new and increasing wonder and awe, the more often and the more seriously reflection concentrates upon them: the starry heaven above me and the moral law within me’.

So wrote the greatest philosopher of the 18th-century, Immanuel Kant, in 1788 in his work of moral philosophy, the Critique of Practical Reason.

It was in 1991 — and the memory is still vivid — that I interviewed Immanuel Jakobovits on his retirement as Chief Rabbi in Britain, and he told me that it was on the basis of Kant’s quotation that his father had named him Immanuel.

During that interview, Rabbi Jakobovits — who died in Israel in 1999 and was said to have been Margaret Thatcher’s favourite clergyman — stressed the absolute centrality of family life to our learning the paths of virtue.

His parting message as he retired, not only to the Jewish community but also to the British people, was that marriage and family life need to be learned; that if necessary we should have classes for young people, teaching them the importance of family life, of how to bring up children, how to discipline them kindly but firmly, and how to instil the sense of that moral law within.

Without that sense, human life falls into absolute chaos, anarchy, and unpleasantness. Yet in our secular age — an age in which, tragically, the Church of England appears to do little more than wring its hands as congregation numbers plummet — this moral bedrock is being steadily eroded.

Today, we live in a society where religion is something for which apologies must be made.

Friends: From left, Haroon Jahan, Shazad Ali and Abdul Musavir who died they were mowed down by a car while protecting their community from looters

A Christian woman working for British Airways who wears a cross round her neck is asked to remove it for fear of offending other people. A nurse who prays with a patient in hospital is committing an almost criminal act. Catholic adoption agencies which disapprove of gay adoptive parents on religious grounds have their licences taken away.

And all the while, our governing classes and academics and teachers chip away at the fundamental truths of the great religions — truths that have stood the test of time for thousands of years — in their arrogant certainty that there are no moral absolutes and that the human race can make up the rules as it goes along.

At the nuttier fringes of the chattering classes there are those, like the geneticist Richard Dawkins and the journalist Christopher Hitchens, who actually believe that religion is a mental poison responsible for all the evils in the world.

The misguided and vacuous thinking of these so-called intellectuals is compounded by a sordid celebrity-culture which holds up role models who should be despised rather than admired.

Amy Winehouse, a pathetic drug-infused alcoholic girl of very modest talent, is held up as great diva; and when she died, her house was surrounded by fans, laying empty vodka bottles as a ‘tribute’.

Jade Goody, the foul-mouthed, racist daughter of a pimp and drug-pusher who died of a heroin overdose in the lavatory of a Kentucky Fried Chicken, appears on Big Brother and becomes a heroine despite — or because of — her ignorance and tendency to strip off in front of the cameras.

Fornicating footballers, who swagger through public lives dripping with gold and jewellery, parading the vulgar acquisitions of their vast wealth — whether it is fleets of fast cars or call girls, are venerated by generations who have never so much as heard of the very real heroes of history.

In the absence of a moral law, we see a decline in standards in all walks of life. Bankers continue to fill their boots even after they have brought the country to the brink of bankruptcy; politicians fiddle expenses and see no reason to resign when they have committed wrongdoings; town hall fat cats pay themselves ever greater salaries as Britain slips further into debt.

By contrast, every day, Muslim men like Tariq Jahan go to the mosque and fall prostrate before the mystery which Immanuel Kant knew lay at the heart of existence.

The Sikhs likewise build temples because they feel awe at the starry heavens above them and the moral laws within their hearts — laws which all men, women and children can recognise when they reflect deeply and in silence.

The catalogue of the great men and women in the past hundred or so years — from Leo Tolstoy in Russia, to Mahatma Gandhi in India, from the Lutheran student Sophie Scholl executed by guillotine aged 22 for her part in a resistance movement to Hitler, to Archbishop Tutu presiding over the peaceful Truth and Reconciliation committees in South Africa — has been the same.

All these people have held fast to values which they believed ultimately to be eternal and God-given.

Go back 100 years to Winson Green, to Southall, and to Wolverhampton, and to all the other scenes of urban violence scarred by horror in the last week.

The years before and after World War I were marked, for the people who lived in these places, by very great economic hardship.

The poverty endured by the inhabitants of Liverpool, Manchester and Birmingham and the poor parts of London led to great programmes of political and social reform.

But the crime rate among the people themselves was much, much lower than it is today. All sorts of reasons have been adduced for this. But there is surely a very simple one that towers over all the others.

In each of these places, there were chapels, often Methodist, which kept alive the human capacity for awe at the starry heavens above and the moral law within.

Not everyone attended the services, though thousands did. Nearly everyone, however, in these communities, whether church or chapel, subscribed to the idea that Good and Evil are given things, not human inventions.

The Jewish religion of Lord Jakobovits told the story of the Law of God being written in stone on the mountain-side of Sinai, and delivered to Moses. Some people choose to believe this happened literally as an historical event.

In a memorable episode of Radio 4’s The Moral Maze, over 20 years ago, historian David Starkey (an atheist) ribbed Rabbi Hugo Gryn about this.

The Rabbi took the teasing in good part of course, but as someone who as a child had been interned in Auschwitz, he knew what a society could be like if it embraced the motto of Milton’s Satan, ‘Evil be thou my Good’.

He knew that whatever the historical truth about the Sinai story in the Book of Exodus, there was an absolute truth in the words Thou Shalt Do No Murder, Thou Shall Not Steal, and Honour thy Father and thy Mother. He’d lived in a country ruled over by a satanic Nazi dictator who thought you could disregard moral truth.

I suspect that when time passes and we look back on this week, it is the religious sincerity of Tariq Jahan that we shall remember. All of us — Muslims, Sikhs, Jews, Hindus, Christians — have a rich religious inheritance.

At the core of this inheritance is a sense of right and wrong. And in all these religions, the school where we learn of right and wrong is the family. Muslims, Jews, Sikhs and Hindus have all, very noticeably, retained this twin strand of family structure and ethical teaching.

Faith in Christianity itself began to unravel long ago, and the majority of those whose forebears were Christian are now completely secular. They would not even recognise simple Bible stories.

The events of the past week have shown the enormous value of a living religious faith.

Not only was Tariq Jahan more impressive than any of the commentators or politicians who spouted on the airwaves this week. He was more human.

By his religious response to his son’s death, he humanised not only the dreadful and immediate tragedy. He showed us that without a religion we are all less than human.