Achieving Global Halal Integrity is not only difficult to achieve, from time to time it may result in unforeseen side-effects.

The meat industry is a good example of how management of the Halal sub-supply chains may either strengthen or weaken both sub-chains.

What integrity to maintain ?

Halal and meat always are a difficult combination and it already starts with the question: What kind of Halal integrity should be maintained? Especially within the European environment, where religious as well as legal confusion exists.

Although Halal and Halal slaughter are well defined, they are executed in different ways. Each method has advantages and disadvantages and the debate usually revolves around stunning or non-stunning. ‘Animal welfare’ or the ‘lack of animal welfare’.

The debate is often very intense in Europe and gets picked up by the local community and media. Unfortunately, as often sound background knowledge is missing, both amongst Muslims and non-Muslims, communication usually is about inadequate execution of Halal slaughter procedures but not about the underlying Halal procedures themselves.

As a result, the discussion tends to get polarised, with a Muslim minority demanding the right of unstunned slaughter only, and the European non-Muslim majority requiring all slaughter to be done in a stunned, animal friendly way.

Surprisingly, both parties ignore the fact that animal welfare is embedded in Halal. Animal welfare and Halal go hand in hand. A message that apparently got lost in the overall confusion. Although it may provide solutions for both ‘camps’.

Adding to the religious confusion, incorrect interpretation of European legislation further heats up the discussion.

EU regulation 1099/2009 on animal welfare at slaughter is interpreted by a lot of Muslims or Halal certifiers as a prohibition of unstunned slaughter or Halal slaughter as a whole.

However, EU regulation 1099/2009 explicitly respects article 10 of the Foundation of the European Union, allowing freedom of religion and freedom to express religion. Article 4.1 of EU 1099/2009 indeed states that stunning is a standard requirement when slaughtering animals in the EU. However, art. 4.4 states that when animals are ‘killed according to special methods for religious purposes’, article 4.1 does not apply.

So although both unstunned and stunned religious slaughter is allowed by EU 1099/2009, a lot of confusion still remains amongst Muslims and Halal certifiers alike.

Adding value to meat… or problems ?

Coming back to meat. Industries always try to add value to their products and the meat industry is no different. Selling cuts instead of selling whole animals is a first step in this value creation process and cuts still constitute a large part of the meat market.

But by cutting up the animal, also the supply chain gets cut up. Not all parts of the animal are valued in the same way. Some parts are more popular and consumers are prepared to pay a premium for them, whilst others have to be sold with a discount. And hopefully for the producer, the premium received for the popular cuts offsets the discount for the less-valued cuts. Otherwise, only costs were added, but not value…

The emergence of a Halal segment in the European meat market was beneficial for the meat industry. Muslims favoured the parts that usually were sold at a discount, creating a bigger market for the less-valued cuts, at higher selling prices. And although part of this extra revenue was lost in retail price wars for the premium cuts, in general, this new market segment was favourable for the meat industry.

The industry structure evolved from one supply chain into two, interconnected but different, sub-supply chains :

The two sub-supply chains come together at the moment of slaughtering. And for the Halal sub supply chain, the slaughtering has to be done Halal. But what ‘kind of Halal’ ? Halal confusion gets in again, but this time not only limited to the Muslim community.

The consequence of this debate on the meat supply chain is clear : the co-existing sub-chains are diverging, growing into two fully independent supply chains, each serving their own markets.

Growing independent meat supply chains will have a significant impact on the industry structure.

As the non-Muslim consumer more and more resents Halal meat, strictly non-Halal meat may become ‘mandatory’ in this segment. There have already been proposals at European legislative level to impose labelling of Halal or ritually slaughtered  animals.

As the non-Muslim community is far bigger than the Muslim community, should the demand for strictly non-Halal meat rise, supermarkets will follow this consumer demand and impose it onto their suppliers. Slaughterhouses will be forced to choose – either ‘specialise’ in the non Halal market or go for the Halal market.

As a result, prices will go up in the non-Halal segment as the demand for the less-valued cuts drops, leading to an increase of the price of the premium products preferred by the non-Muslim consumer. Back to the ‘old situation’, where there was no Halal segment ‘subsidising’ the premium cut segment.

The impact on the Halal segment is more severe. All cuts, also the more expensive premium cuts, will have to be sold within the Halal market segment. The premium that can be asked for such cuts will be lower than in the non-Muslim segment, resulting in a higher price for the cheaper cuts, to compensate for the lower price of the premium products. However, the overall result would be higher than average prices for Halal meat. 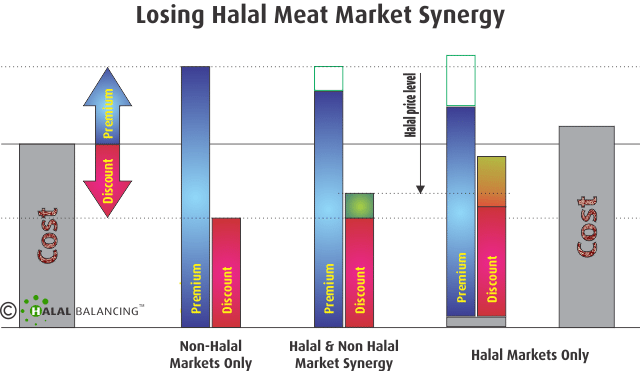 Additionally, as the Halal market is much smaller than the non-Halal market, economies of scale will be lacking, increasing the overall cost of a Halal slaughtered animal, by further increasing the average cost of the derived Halal meat.

Availability of Halal meat is also likely to decrease as the synergy with the bigger non-Muslim market was given up.

Sub-supply chain autonomy does have its price.

Or eliminate the confusion ?

The presence of two synergetic meat sub-supply chains is not limited to Europe alone. In most meat producing and exporting countries, once cuts are being sold and no longer the whole animal, two interrelated sub-supply chains emerge. And often one supply chain serves a strict Halal market and the other serves markets that could consume Halal meat, but do not require it.

So what could happen in Europe might also happen in other parts in the world.

Whenever the two sub-chains are diverging instead of converging, Halal meat market synergies may get lost. Should this be voluntary, with full knowledge of all the consequences, so be it. But if this only happens because of lack of mutual understanding of correct Halal procedures, it would be a pity. As after all, aren’t animals not slaughtered with respect for animal welfare, not always considered to be non Halal?