Her business, Sufyaa – a clothing label for Muslim women – hit $1 million in turnover in 2014, just three 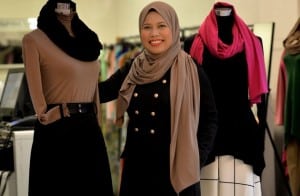 years after its launch.

Label owner Azrina Tahar, 38, says of her runaway success: “I never expected in my wildest dreams to reach such a milestone so quickly.”

She is part of a global market that is rapidly growing: Muslims reportedly spent US$230 billion (S$327 billion) on clothing in 2014 – a figure that is expected to balloon to US$327 billion by 2020, a recent Thomson Reuters State of the Global Islamic Economy Report says.

The untapped arena of the fashion industry recently made headlines around the world as high fashion house Dolce & Gabbana launched its line of abayas and hijabs in the Middle East.

Ms Azrina tells The New Paper on Sunday that she travelled to London for the Muslim Lifestyle Expo in August last year, where Sufyaa was the Singaporean representative.

She says: “Our designs were flying off the rack. I sold 90 per cent of my line when I was there. Some of them ordered designs to be delivered because we didn’t have enough (stock) with us.”

Ms Azrina says demand for modest wear is the highest it has ever been.

When she started out, she sold a mere 500 items – ranging from shawls, slip dresses, tops and bottoms – every month.

Now, she does not go a month without seeing “at least 3,000 items” fly off the rack.

On good months, she can sell up to 4,000 items. The online traffic to her label’s website sees her shipping about five orders abroad weekly, which, on average, makes up 30 per cent of her monthly total sales.

But it is getting “more competitive in our own backyard”, says Ms Azrina.

“When I started, there weren’t many modest wear retailers.

“Now, there are always new modest wear stores sprouting up online, so while it is becoming popular, it is also becoming more competitive.”

She adds: “I am just constantly setting myself apart from the rest of the stores with personalised services.”

“With the surge that Muslim fashion has experienced over the last five years, you can probably expect Singapore to be exporting to more destinations in the near future,” says the Dubai-based chairman.

“The awareness and the exposure that modest fashion has been getting in recent times – with the likes of DKNY, Mango, Zara and Tommy Hilfiger jumping on the bandwagon – prove that mainstream labels are starting to pay more attention to opportunities in the arena of Muslim fashion.”

Ms Alia says the market for modest fashion is ever growing as Indonesia, Turkey and even Australia constantly appear on the radar when it comes to modest clothing demands.

“Some of the online stores I’ve worked with around the world have told me that their market is starting to go beyond Muslim women.”

Religion aside, more women are opting for designs that are more conservative and modest, Ms Alia explained.

“It is definitely exciting times.”