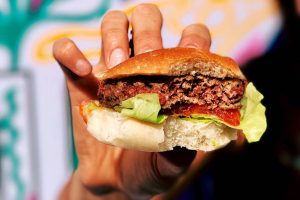 Leviticus 11 contains a zoo’s worth of animals. The hyrax and monitor lizard. The katydid is there, as is the gecko. And it ends: “You must distinguish between the unclean and the clean, between living creatures that may be eaten and those that may not be eaten.”

Dietary restrictions are woven into religious texts, the Old Testament and the New, the Quran, the Vedas and the Upanishads. Some are mercifully practical, as in the law of necessity in Islamic jurisprudence: “That which is necessary makes the forbidden permissible.”

This month, American food business Tyson announced it is investing in a company that will launch plant-based shrimp early next year, raising a curious question. Will it be kosher? The short answer is its ingredients — which mimic the verboten crustacean with a proprietary algae blend — could well be both kosher and halal. Once the product launches, the company will seek certification so Orthodox Jews and certain Muslim groups that avoid shellfish can enjoy a shrimp cocktail, scampi, a po’ boy or ceviche.

And yet. In this era of plenitude and choice and disruptive technology, what is permissible, what is forbidden and what is flouting the letter of religious law?

The food system is in flux, the rise of plant-based meats and the promise of cell-cultured meats bending categories such that legislation, ideology and theology are scrambling to keep up.

If God says no pork, how does He feel about a very persuasive forgery? And if only beef from the forequarter is permitted, how will observant Jews parse meat grown in a lab, no bones and no quarters at all? How do you bleed an animal with no blood or slaughter an animal humanely if there’s no slaughter? And if you give up meat for Lent, what constitutes a cheat?

About 10 per cent of the United States’ 5.5 million Jews consider themselves Orthodox — that number is higher for younger Jews, so the percentage is growing. With a global population of 1.8 billion, the Muslim community has now reached 3.45 million in America and is likely to become the second-largest religious group in the United States by 2040. Hinduism, with more than a billion adherents globally, is practiced by 1 per cent of the US population. These are large demographics to be courted, potentially the difference between solvency and failure in the ever more crowded alt-meat arena.

There are already 100 plant-based meat products in the United States certified kosher, according to the Jewish Initiative for Animals, a project of Farm Forward, a farm animal advocacy nonprofit that works with all Jewish denominations.

In May 2018, Impossible Foods received its official kosher certification from the Union of Orthodox Jewish Congregations of America, the largest organisation of Orthodox synagogues in the United States, responsible for certifying more than 400,000 industrial and consumer products. A rabbinic field representative had toured the 6225sqm manufacturing facility in Oakland, California, confirming that all ingredients, processes and equipment used to make the Impossible Burger were compliant with kosher law.

And after a halal auditor visited the plant to determine ingredients and practices were halal-compliant and adherent to Islamic dietary laws, Impossible Foods received its halal certification from the Islamic Food and Nutrition Council of America in December 2018.

Packages, which debut in grocery stores on September 19 (Impossible has been a restaurant product to date), will get an “OU” symbol that means the product is “pareve”, The designation signals it is made from inherently kosher or kosher-certified ingredients that are neither meat nor dairy. It will get a symbol with an M to indicate it is halal.

“Let’s for the sake of argument say everything they use is kosher; still their equipment isn’t kosher. An observant Jew will never even walk in.”

Non-kosher restaurants for the Orthodox may still be a no-go, but, Elefant argues, the majority of kosher foods are purchased in supermarkets that carry non-kosher items, packages of certified kosher Beyond Meat plant-based pork sausage shouldered right up against forbidden pork sausage made from animals.

“Is it a violation of the spirit of the law? That becomes a realm that you can never end,” Elefant says. “The best example that I always give is there are companies that are certified to make pizza for Passover. There’s not one issue about the kosher status of those products, but you may feel that it’s inappropriate to eat pizza for Passover.”

He adds that it’s a constant challenge to interpret dietary law in light of modern technology, and that while “there clearly is a biblical statement that the purpose of the dietary laws is to separate us, it’s not up to us to draw the line”.

Rabbi Eli Lando is the chief customer relations officer with OK Kosher, one of the country’s oldest and largest certifiers, which certified Beyond Meat (Beyond says it intends to apply for halal certification). Lando is more bullish about the growing array of plant-based meats, predicting that products like these will make it easier to keep kosher and thus grow the ranks of the observant.

“You may speak with three different rabbis and get 25 different opinions, but we know according to Jewish law that you are not supposed to be prohibiting yourself from what is allowed according to God’s commandments,” he says.

The prohibitions, he says, are about the actual creatures (pigs, shellfish, rabbits and reptiles), not a plant-based facsimile, however uncanny the likeness. Orthodox Jews, he notes, are frequently big fans of fake crab made of finely pulverised white fish.

Lando sees plant-based meat as a revolution of sorts.

“A person today knows that being kosher does not mean you have to go to the back of the store and look for something like a second-class citizen. Having those products commonly available is achieving a great milestone,” he says.

Kosher certification is exhaustive and costly work — every ingredient must be inspected, the facility may have to be washed down at high temperature, and then there’s a waiting period. Surprise inspections occur frequently. Lando estimates that certification in North America costs between US$4000 ($6245) and US$8000 per manufacturing facility.

The inspection and certification process is similar for halal foods. For plant-based products designed to imitate haram products (pork and other foods forbidden by Islamic law), Roger Othman, director of consumer relations for Islamic Food and Nutrition Council of America, says words matter.

“Plant-based bacon bits, for example. The product would qualify to be halal but may be repugnant to halal consumers if the word bacon appeared in the name,” Othman says. “Halal consumers would not know what pork chews like, maybe not even what it smells or looks like. If plant-based, it could qualify to be halal, but the naming should not contain any pork-related words.”

For Mat McDermott, director of communications at the Hindu American Foundation, the introduction of Impossible Burgers and other plant-based meat 2.0 may not be particularly problematic. Plant-based meat companies are proliferating in India.

Still, there may be a “yuck” factor for the ones that bleed like the real deal, and because cows are sacred animals for many Hindus, plant-based beef or cell-cultured beef prompt additional queasiness and questions.

“Mimicking is fine; it poses no theological problems,” he says.

If it looks like a duck and quacks like a duck, it still may just be textured vegetable protein. That said, most Hindu vegetarians eschew meat for ethical reasons.

McDermott believes we’re at an inflection point where consumers of all faiths are making choices that consider environmental problems with ethical implications.

“Cultured meat presents thornier questions Hindus have never had to answer.” he said. “If there’s no perceptible harm, no animal killed in the process — that’s the central knotted question of diet and animal welfare. Where do you draw the line?”

Aaron Gross, an associate professor of Jewish studies at the University of San Diego, also perceives a cultural shift in religious attitudes toward animal cruelty. For 15 years, there has been a tiny “animals and religion” panel at the annual American Academy of Religion conference, with maybe 10 or 15 attendees. In the past couple of years, that has ballooned to several events with as many as 150 attendees each. He says that as animal agriculture became more industrialised and fewer Americans had direct connections to farm animals, there had been a shift away from addressing issues like animal suffering.

“But it’s returning to its historic place as something theologians grapple with,” Gross says. He cites climate change, a growing interest in food’s provenance and “deeper currents of how we make meaning in the world” as reasons for the pivot.

“God’s thinking about meat. He’s concerned about meat enough that it is a major theme,” says Gross, adding that there’s an energetic dispute within Judaism about whether to raise these broad ethical questions about meat at all.

Cultured or cell-based meat, grown from a tissue sample of an animal in a lab, is poised to launch next year and may solve some of these ethical questions, says Bruce Friedrich, founder of the Good Food Institute, a nonprofit that promotes plant-based meat. But it raises others.

“We’re talking about a whole new way of making meat that has everything to do with food safety and humane treatment,” he says.

Three of the first eight cultivated meat companies are in Israel, he says, although none is certified kosher because there is not yet an established certification framework.

Jewish and Muslim scholars are still evaluating what this new Wild West of meat might mean.

Companies like Memphis Meat and JUST that aim to debut cultured products next year have a vested interest in having their products certified halal or kosher, but whether rabbis will certify it as “meat” or pareve is up in the air.

Gross and Friedrich predict yes. Rabbi Lando suggests that the Orthodox community will have more flexibility if it is certified pareve, but he’s not sure.

“Great minds are working on cell-based meat. Research is still being done on this topic,” Lando says. “We prefer to measure twice and cut once.”