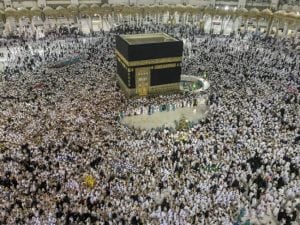 WASHINGTON:  Eid al-Adha, also called the “Festival of Sacrifice”, is the second of two Islamic holidays celebrated by the Muslim nation each year. The other holiday being Eid al-Fitr. Eid al-Adha is the holier of the two holiday and will be celebrated today, from sundown to sundown, tomorrow August 21. The world-wide celebrations equate to more than $400 billion of the wrold-wide Halal food market.

The story of Eid al-Adha is the biblical story of Abraham and his willingness to sacrifice his son to God. Before Abraham could sacrifice his child, God provided him with a ram instead. Now, believers sacrifice an animal to God. The animal is then to be divided into three parts: one-third of the share is given to the poor and needy; another third is given to relatives, friends, and neighbors; and the remaining third is retained by the family.

Money spent around Eid al-Adha is valued at $415 billion. Those dollars are mostly for the Halal food products necessary for the festival’s feast. Halal foods are those produced in accordance to what is permissible or lawful in traditional Islamic law.

This Eid al-Adha more than one million animals, lamb, beef and camel meat, are expected to be sacrificed n Saudi Arabia alone on this Eid.As Muslims around the world follow the practice of sacrificing an animal on Eid, those numbers increase significantly.

The market and economic opportunity attached to this practice is significant enough to attract none-Muslim countries. In fact, the market value for Halal meat is so high that does not only limit the profit to Hajj practice but to the halal meat consumption throughout the year.

Saudi Arabia, the homeland of Hajj pilgrimage imported a total of $1.5 billion in poultry in 2016, equivalent to around 71 percent of its total meat imports and Brazil supplied $1.25 billion of poultry to Saudi Arabia in 2016.

In early 2018 Saudi Arabian authorities have this week lifted the ban on sheep meat from the UK, following a detailed process to gain access to this new and lucrative market.

As the result, Lamb from the UK will soon be heading to Saudi Arabia in a deal which could be worth £25 million over the next five years.

Such a profitable market is owned and managed by none Islamic nations. This is another example of the Muslim nation’s lack of leadership skills that have allowed war and lack of leadership have led its people to scatter around the globe. Losing the economy of the Halal and Islam based industries to other countries.

This explains why most Islamic nations are so dependent on the West. Even as they are starving to death with declining life quality. Leadership needs to concentrate on bringing stability, and the economy of its people, back to the Middle East, bringing back the people to the Nations of Islam.

Have a Thoughtful Eid!