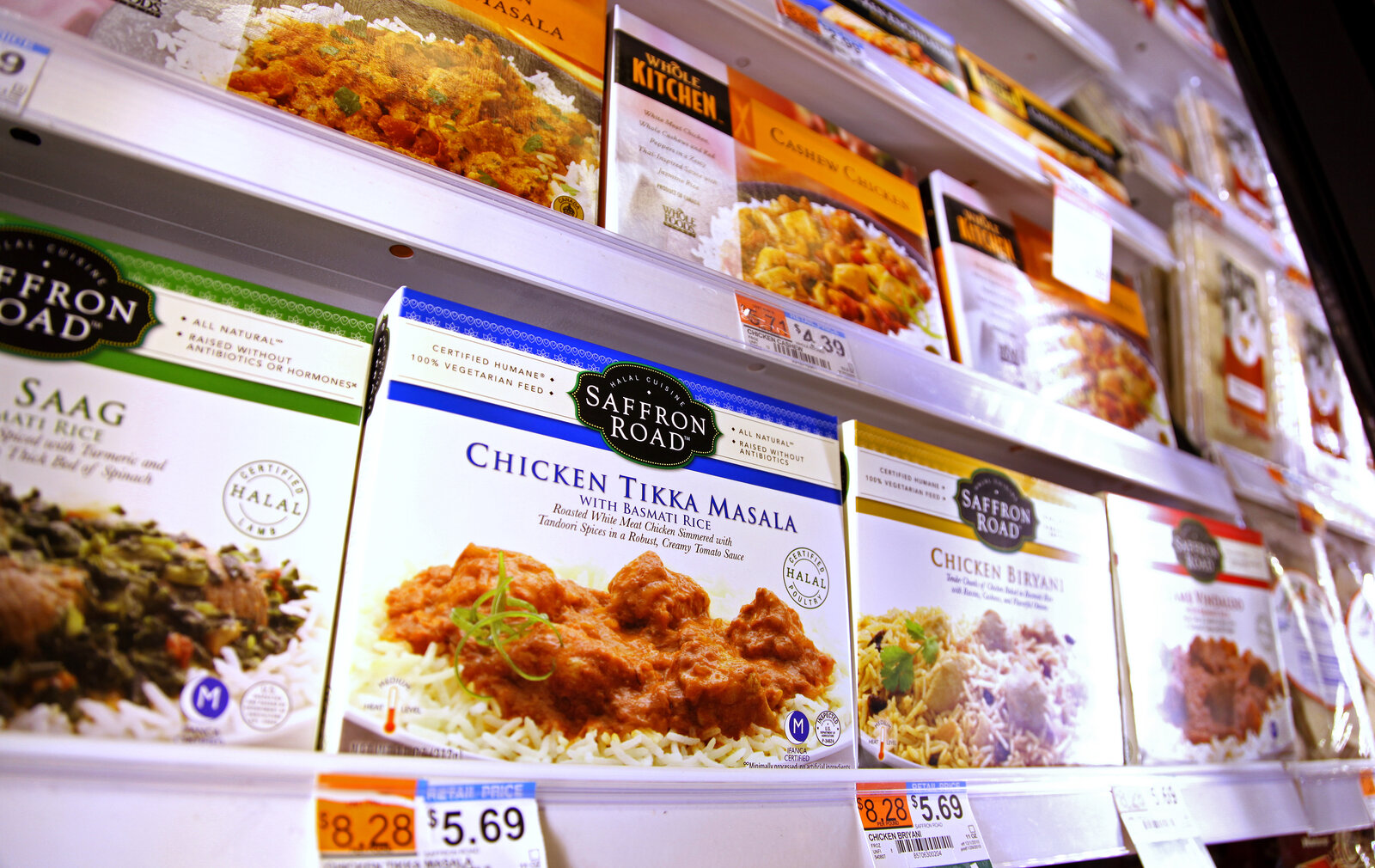 Food that met Muslim dietary strictures was once difficult to come by, but the growth of the American Muslim population — and the increase in non-Muslims consuming halal food — has made it much easier to find such offerings in supermarkets like Whole Foods Market.
Craig Ruttle/ASSOCIATED PRESS

It’s an evening late in the spring, and the sun is perilously close to setting. I’m getting nervous. Ramadan brings out the Muslim rush when it’s time to break our fast, which puts me among the throng outside of Bantam King, a Japanese restaurant in D.C.’s Chinatown where we’ve all congregated. That’s because Bantam King announced on Facebook that it was only serving halal food during the holy month.

A friend enters the shop and greets me. “Hey, assalamu alaikum,” she says. Gesturing to the people around us she remarks, “I guess everyone came to try the halal ramen.”

Bantam King has made itself a pop-up halal shop — “Ramendan,” as the promotion was called. “Halal” is often mistaken for a particular type of cuisine, but in fact is the Arabic word for permissible. Halal food, on the other hand, is any type of food that adheres to Islamic dietary prescriptions — free of pork, its byproducts, and alcohol, while meat and poultry must be processed according to Islamic requirements.

Historically, finding halal food in North America has been a labor-intensive affair. When I was a child in the early 2000s, my family would have to travel from one end of Toronto to the other if we wanted to eat a halal steak.

It’s why, back in 1998, Shahed Amanullah created the online halal restaurant guide Zabihah.com, which became a vital tool for people looking to eat halal.

“At the time, I could find only about 200 restaurants through either word of mouth from friends or just searching on the internet,” Amanullah said. But finding halal food is getting easier: Today, Amanullah’s site boasts well over 7,000 entries. It’s how I find most of the restaurants where I eat.

It’s no coincidence that the halal food segment is becoming more profitable: In 2016, Bloomberg reported that sales of halal food in grocery and convenience stories reached $1.9 billion in the U.S., a 15-percent increase from 2012.

Globally, in 2015 the halal certified food and beverage market was estimated at $415 billion, according to Thomson Reuters’ latest State of the Global Islamic Economy Report. And as many Muslim countries rely on imported food, the U.S. has become a major exporter of halal products.

“As the economy sort of shifts globally, it makes it very appealing to food producers to market halal foods not just domestically but internationally,” said Salah Hassan, who teaches Arab American and Muslim American studies at Michigan State University.

Besheer Mohamed, a senior researcher at Pew, says that the number of U.S. Muslims has been growing steadily, from a relatively small base. “We now think that 1 percent of the U.S. population is Muslim,” he says. “And so as the number of Muslims grow, interest in Muslim-specific products presumably will also rise just by pure numbers.”

But halal food isn’t catching on just because devout Muslims are eating it: Amanullah says roughly half of his viewers are exclusive halal eaters and the other half are not.

The growing popularity of halal food in America runs parallel to a darker trendline: the intensifying of Islamophobia in America.

The Pew Research Center recently released its 2017 survey of U.S. Muslims. Roughly half of the participants say they have experienced discrimination, and the share of Muslims who say they have faced at least one instance of religious discrimination has risen modestly.

And the numbers seem to bear out these fears: The Council on American-Islamic Relations recorded a 65-percent jump in anti-Muslim bias incidents from 2014 to 2016, and the number of hate crimes in the first half of this year spiked 91 percent over the same period in 2016.

So, what gives? Krishnendu Ray, who chairs the department of nutrition and food studies at New York University, pointed to similar examples in communities that endured broad suspicion even as their cuisines became widely sought and consumed.

He pointed to the prevailing anti-German sentiment during and immediately after World War I which, strangely, came at the same time as a surge in the market for German food — although the food was often renamed to make it more palatable. (This is how frankfurters became hot dogs.)

You could see the same phenomenon play out for Chinese people, a group for whom contempt ran so deep that in 1882 the government formally forbade them from immigrating to the U.S. But by World War II, anti-Chinese sentiment existed simultaneously with the chop suey craze. And Ray says that while large parts of the population had disdain and disgust toward Chinese food, there was also a kind of excitement about something “exotic” and different.

Ray calls this idea “culinary colonialism”: a mode of acquiring cultural capital — and the idea of worldliness and cool points — by consuming everything. The colonizer seizes the social assets of a person by claiming something like their cultural foods.

“This omnivorousness is related to consuming the other,” he says, “other” in this sense meaning the group being colonized. “Just because you are consuming something doesn’t mean you have any particular respect for that other.”

But Amanullah, the founder of Zabihah, attributes some of the interest in halal food to the current political situation — consuming halal food in a kind of demonstration of one’s political beliefs.

“This was very much driven by a reverse Trump effect — because of the highlighted attention towards Muslims in the wake of Muslim ban,” he said. “American communities and businesses are wanting to show their solidarity and support for their Muslim neighbors.”

Ray says that because the U.S. is starting at such a low baseline regarding halal cuisine, any increase in the consumption can look like a huge uptick in growth.

Ironically, Ray says such an increase can also drive Islamophobia. Anthropologists call it the fear of small numbers — the growth of the halal market becomes evidence of an explosion of Muslim-ness and fuels conspiracy theories about the impending imposition of sharia law.

Amanullah says he sees a little of this with people who are hostile to Muslims using his Zabihah website as a guide for places to avoid. There have also been a few franchisees of bigger companies that offer halal but who’ve asked to be removed from his database. “The franchises that don’t want to be labelled on my site, they tend to be headquartered in parts of the country where Islamophobia is more of a problem,” he said.

And then there are the restaurants that have faced a little bit of backlash but realize it’s a choice: between a few trolls harassing them on Facebook or bolstering their bottom line. Bantam King is a great example of that, Amanullah says. “They didn’t expect nearly the amount of attention they got, but every night at 8:30 they were packed,” he said. “They basically had two dinner rushes.”

Whether halal food will become a relatively mainstream designation, like kosher food, remains to be seen.

Ray says he is uncertain whether Islamophobia will allow for that to happen, while Amanullah is more optimistic. He says that where food goes, people will follow, and he hopes halal food will be one of those things that normalizes the American Muslim presence in America.

So what does all this mean for Muslims like me? As I sat in Bantam King that day in Ramadan, at the counter because there was no other available seating, I heard a waiter tell the cooks that sunset was at 8:28 p.m.

That was the time for breaking fast that day, so the Muslim patrons would want their meals by then. I was used to meticulously counting down the minutes till sunset, but here I was in this restaurant in the U.S. — and for the first time in my life the non-Muslim people around me were doing the same.

I don’t expect food will single-handedly save us all from bigotry. But at least now I can vent over a bowl of halal ramen today, and halal who-knows-what-else in the years to come.

Radiyah Chowdhury is a free-lance writer based in Toronto.