The breadth and depth of the United Nations Sustainable Development Goals (SDGs) is unprecedented, addressing issues as diverse as poverty, health, education, inequalities, cities, climate, peace and partnership. Like every form of international agreement, the SDGs are the result of an uneasy compromise. They nevertheless represent a moment in history, described as a once in a generation opportunity for transformational change.

There is a significant danger in misinterpreting the 17 Sustainable Development Goals as separate disciplines that need to be dealt with one by one and in isolation. Academia, government departments and international institutions operate in a siloed fashion that makes such holistic thinking and collaboration difficult to achieve. In this context I have been investigating the links between SDG 5 Gender Equality and SDG 11 Sustainable Cities and how they relate to each other and the wider SDG framework.

Cities generate their own wealth, shape local and often national policies and are spearheading a thrilling new vision of governance for the implementation of the SDGs. Pragmatic in approach, close to real people and their problems, cities also contain the seeds of their own regeneration. However, cities have been planned, developed and built primarily by men for men, embedding inequality as a socio-economic norm.

The Agenda 2030 positions women and girls as diverse and innovative agents of change, and gender equality is central to the achievement of all the SDGs. However, when we drill down to the target level of SDG 11 (Targets 11.2 and 11.7), the language is telling. Women are characterised as amongst the vulnerable members of society requiring protection alongside children, older persons and persons with disabilities. Almost 40 years after the Convention on the Elimination of all forms of Discrimination against Women, the international community continues to associate women with those in need of protection, instead of proposing a framework that inspires and propels women to help shaping the regeneration of our cities. 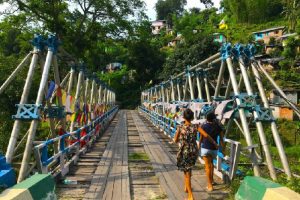 Given that women live in so many disparate urban settings, there can be no single approach or strategy to address the apparent disconnect between SDG 11and SDG 5. However, in innovative ways, women are already meeting the challenge, working to co-create a society that uses energy and resources with greater efficiency (SDG 12), distributes wealth equitably (SDG 10), and makes quality of life, rather than open-ended economic growth (SDG 8), the focus of future thinking.

In Darjeeling at the foothills of the Himalayas, for instance, a group of women are advancing the SDGs, prioritising #SDG6 Clean Water and Sanitation by harvesting rooftop rainwater and promoting responsible consumption (#SDG12) amongst its growing population. Taking into consideration the influx of tourism, and the lack of integrated planning policies and conservation measures, the group also prioritised #SDG11 –Sustainable Cities and Communities – as a potential catalyst for the changes that need to occur in the context of rapid unplanned urbanisation and its impact on infrastructure, mobility, waste management, noise and air pollution.

In the Brazilian city of Santana de Parnaiba, it is women, many of them urban planners, administrators and housing officials, who are leading the process of SDG implementation. Discussing how urban systems fail to respond to women’s needs, the female Secretary of Housing recently argued that while male planners see dislocation as natural and a way to concentrate commercial activities, women in the same role would plan services to be offered at walking distance of neighbourhoods. For men, the issue is mobility while for women, the issue is proximity.

Referring to the way men experience the city, Baudelaire wrote once ‘the crowd is his domain, just as the air is the bird’s, and water that of the fish. His passion and his profession are to merge with the crowd’. More than a century later, women continue to navigate cities in a profoundly different way from men, often seeking protection from risks and striving to be respected and safe. While there has been some research on how urban systems fail to respond to women’s needs, only recently cities have been addressing the ‘urban-planning gender gap’.

Over the years, I have held a sustained interest in the role women can play in rethinking the way we plan, walk, live, do business and enjoy culture in our cities. New trends in urbanisation are likely to unfold over the coming years. The role of women in proposing new patterns of urban development, and how we further their leadership as designers, planners, curators, artists, builders and city dwellers, is fundamentally crucial to the implementation of the 2030 Agenda.

Working class women, mothers, academics, ‘artivists’, professionals, the revolutionary and the conservative, the mature and the young, women wearing burkas, saris, jeans or suits. They all have something in common: the quest to regenerate cities in ways that reflect true equality for all women.