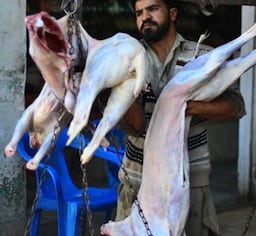 ISLAMABAD: Pakistan has exported meat worth US $ 123.61 million during this year which shows an increase of 13.9 per cent as compared to same period of last year.

The country earned precious foreign exchange of US $ 108.54 million through export of meat (beef, mutton and camel meat) last year due to measures adopted to promote the sector.

An official at Ministry of National Food Security and Research on Wednesday said more than 9500 exotic animals, 318,768 semen doses and 4300 embryos of high yielding animals have been imported during last one and half year while new slaughter houses, milk processing and meat processing units have also been established in the private sector.

He said future plan for the livestock sector is to persuade the policies to achieve five percent or more growth in meat and eight percent or more in milk production through shifting from subsistence livestock farming to market-oriented and commercial farming.

The focus will be to encourage and promote high yielding animal’s production and their crossbreeding through Artificial insemination services. The future road map has clear milestone in the shape of entering into global Halal Food Trade Market.

He said the emphasis is also on improving per unit animal productivity and moving from subsistence to market oriented and then to commercial livestock farming in the country to meet the domestic demand and surplus for export.

When asked to comment on its contribution, he said the livestock sector contributed around 55.1 per cent to agricultural value added and 11.6 percent to national Gross Domestic Product (GDP) during first this year as against 54.6 percent and 11.6 percent during the same period previous year.

The gross value added of the livestock sector at constant factor cost has also increased from Rs. 672 billion last year to Rs 700 billion during this year, showing an increase of 4 percent, he added.

The official said population growth, increase in per capita income and the potential for export is fueling the demand of livestock and livestock products and added the rise in production cost has increased the retailer’s and consumer’s price index for milk, yogurt, meat, eggs, and other items.

He said a Livestock Wing has been created in the Ministry to promote coordination of foreign aid and technical assistance in the livestock sector and related fields, adding that the Wing with its redefined mandate continued regulatory measures that included allowing import of high yielding animals, semen and embryos for crossbreeding.