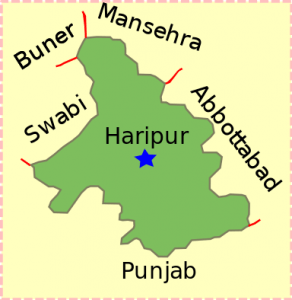 KP Chief Minister Pervez Khattak on Thursday said that Malaysia will establish Halal food industry at Ghazi, Haripur and in this regard an agreement was also signed with Canada. He was chairing a meeting on under-construction Swat Express Way at CM Secretariat Peshawar. Advisor to Chief Minister for C&W Akbar Ayub Khan, Provincial Secretary for Communication Engr Muhammad Asif Khan, high ups of PkHA, FWO, NLC, WAPDA, Sui Gas and other concerned federal and provincial departments attended the meeting.

Khattak said that his government would not take loan that over burden on the province and therefore projects on the basis of BoT were being preferred.

He revealed that provincial government had identified 10 to 14 new tourists resorts for attracting foreign investment in the province that were showcased in the Beijing Road Show to attract foreign investment.

He said MoUs worth US one billion dollars had been signed between local and Chinese investors. He said the government negotiated with FWO for these projects. He also asked the Pakistani investors to avail the opportunities of investment in Khyber Pakhtunkhwa.

He said all the developed countries including USA and Europe have shown interest to invest in Khyber Pakhtunkhwa. He said our province was open for all. He said the incentives offered for Chinese investors were also extended to Pakistani and foreign investors.

He said China would invest in roads, railway tracks and industries. He said 2000 acre of land had already been allocated at Hattar for industrial purpose wherein 1000 acre land had been purchased by the investors. Similarly China Industrial Park would be established near Rashakai interchange on 40 Thousand acre land.

He said that agreements of US 24 billion dollars have been made with Chinese government including 1900MW power houses, forest, railway track and Giligit-Dir-Chitral Expressway.

The CM directed for round the clock work on Swat Motorway to ensure timely and quality completion of this vital project. He asked the authorities concerned for expediting all developmental and construction works on the highway including cutting of rocks, drilling and lining of the tunnels, installation of facilities along both sides of the road including rest places, restaurants and mosques, security arrangements for passengers the appointment of security staff and procurement of vehicles and other allied requirements.

He also directed for the arrangement for payment of required Rs 120 million to the concerned federal body for foolproof security arrangement on this highway. The authorities told that 100 percent land acquisition for the motorway right from Kernal Sher Interchange to Chakdara has been completed, high transmission lines being removed, work on 1200 meter dual parallel, tunnels from both northern and southern sides was in last stages of completion while the identification and land acquisition process of seven interchanges on express way has also been completed.

The project has 5 packages and construction work was in full swing on all of them. The first phase of motorway from Kernal Sher Khan interchange to Katlung would be open for traffic within next couple of months. The drilling and cutting works in mountainous areas was also carried on round the clock whereas the remaining portion of 81Km Swat Motorway up to Chakdara would also be opened for all traffic by March or April 2018. The CM asked the FWO authorities to ensure timely completion of the project as per agreement and assurances. He said that Swat Express Motorway being constructed with cost of Rs 35 billion was the mega scheme of provincial government.

He expressed the confidence that this project would be completed by March next year that would greatly contribute in promoting tourism and business activities in Malakand and Northern areas. He said negotiations were being made to extend the motorway to Mingora and agreement might be inked soon in this regard.