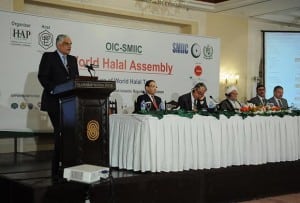 ISLAMABAD: First World Halal Assembly by OIC-SMIIC accomplished all the objectives. More than 250 scholars and experts gathered from 40 countries in Islamabad approved the recommendations with consensus.
OIC-SMIIC: World Halal Assembly was held concurrently with the 8th Board of Directors and 6th General Assembly meeting of OIC-SMIIC.
The event was inaugurated by Mr. Zahid Hamid, Federal Minister of Science & Technology, GoP, In his inaugural speech he assured the private sector of Pakistan to provide full assistance in promotion of Halal brands; establishment of one window under Ministry of Science for Accreditation and Certification of companies. He said that very soon the law would be presented in the National Assembly for the approval after it is being recommended by all stakeholders.
World Halal Assembly was jointly organized by Halal Products & Services Association of Pakistan (HAP) and Pakistan Standards and Quality Control Authority (PSQCA) duly supported by SMIIC (Standards & Metrology Institute of Islamic Countries).
The OIC body mandated to work on Halal Standards and Accreditation on behalf of OIC (Organization of Islamic Countries). Mr. Iftikhar Cheema receiving award on behalf of the Emirates Airline, the official airline of the event from H. E. Zahid Hamid.
Guest of Honor, His Eminence Ayatollah Hassan Alemi, representative of Supreme Leader in Jihad-e-Agriculture, Iran in his speech emphasized on the need of harmonization and cooperation in order to achieve ‘One Halal’ logo and ‘One Halal’ standard. He informed that his government is fully supporting the SMIIC agenda. Furthermore, he informed his government priorities for the promotion of Halal brands, imports and exports procedures and the latest development made by his Ministry.
Later, in the sessions, the international Halal industry experts from all over the world gave comprehensive information to the audience; addressed the issues and challenges related to Halal business, certification, accreditation and marketing.
They also highlighted the role of trade bodies in promotion of Halal trade and highlighted the issues which could be taken up by the governments for promotion of Halal exports.
H.E. Haluk Dag, Secretary General, Standards & Metrology Institute of Islamic Countries (SMIIC) presenting memento to Mr. Asad Sajjad, CEO Halal Development Council and Senor Vice Chairman of Halal Products & Services Association of Pakistan (HAP) in recognition of his services for extra-ordinary work done for creating Halal awareness and promoting agenda of SMIIC standards worldwide.
Chairman, HAP, Mr. Kazi Asad Abid and Senior Vice Chairman, Mr. Asad Sajjad in their speech and presentation informed the audience about the opportunities available and how to enter in this trillion dollar Halal market to give a boost to the efforts of government to achieve desired export results.
Pir Buksh Jamali, Director General, PSQCA informed that the World Halal Assembly was the largest Halal gathering in the region. He informed that the delegates have given overwhelming response. Several cooperation agreements were signed during the World Halal Assembly between Pakistani companies and standardized bodies for the export of Pakistani Halal products. These MoUs would help Pakistan to increase the Halal exports of Pakistan in big volume.