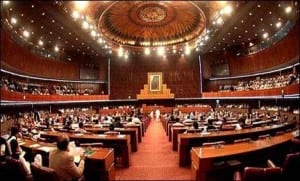 ISLAMABAD: A walkout by the opposition parties’ members and adjournment of the National Assembly sitting before time marred the proceedings of the House on Thursday.

On the one side, the opposition protested against the absence of ministers to respond to queries during the Question-Hour and on the other hand, the House witnessed a lack of quorum mainly due to a lack of interest by the treasury benches.

Only a day before on Wednesday, the proceedings of the House had to be suspended for a few minutes and due to non-availability of concerned ministers during the Question-Hour.The parliamentarians from the Pakistan People’s Party (PPP) and Jamaat-e-Islami (JI) and an independent member registered protest against ministers who did not turn up in the House.

“We cannot attend the proceedings in these circumstances,” Syed Naveed Qamar said while announcing to stage the walkout.He said that it was serious to note that the ministers were not present in the House. “This is not a debating society, they should take it seriously,” he said.

Sher Akbar Khan of the JI and Aamir Dogar, an independent member, also protested against the disinterest being shown by the treasury benches in proceedings of the House. Aamir Dogar also pointed out the lack of quorum in the House saying that not more than 50 members were attending the proceedings.

Mehmood Khan Achakzai of the Pakhtunkhwa Milli Awami Party (PkMAP) drew attention of the chair towards the absence of concerned officials in visitors galleries to take notes of proceedings. He said the House had the power to send any officer to jail for six months, so the House needs to be taken seriously. He said parliament could summon any officer as it was the most supreme institution of the country.

Meanwhile, the government has proposed the establishment of Pakistan Halal Authority (PHA) through an Act of the Parliament titled as the Pakistan Halal Authority Act 2014. Minister for Defence Production Rana Tanveer Hussain during question hour told the National Assembly that the purpose of establishing PHA is to promote imports and exports, trade and commerce with foreign countries and inter-provincial trade and commerce in Halal articles and processes.

The House was informed that the draft bill for the establishment of PHA was finalised in the light of comments of relevant stakeholders and was sent to Cabinet Division and Council of Common Interests (CCI) for their approval in principle.

The CCI in its meeting has approved the draft PHA Bill 2014 and further action in this regard is being taken. The provincial governments and the respective governments of Gilgit Baltistan and Azad Jammu and Kashmir may also opt to adopt the provisions as envisaged in the act.

The powers and functions of the authority shall be to develop and implement policies, strategies, plans and programmes for promotion of imports and exports, trade and commerce with foreign countries and inter-provincial trade and commerce in Halal articles and processes.

It would recommend the Halal standards developed for articles and processes mentioned in schedule-I for adoption and notification by the National Standards Body. It would also ensure that the Halal standard for any article or process are in accordance with OIC guidelines.