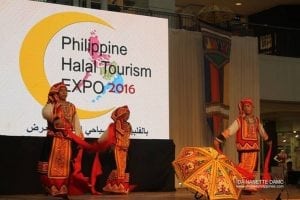 Philippines assumed its chairmanship of the Association of Southeast Asian Nations (ASEAN) Summit 2017.

Guesting during the business forum at DermPath, SM City Davao on Tuesday, Marilou W. Ampuan, secretary of Mindanao Islamic Chamber of Commerce and president of United Islamic Center, the official organizer of Philippine Halal Tourism Expo said that although the date is still tentative, she expressed hopes that the expo would be “in-time” with the ASEAN-related meetings set on April 27 to 29, 2017.

“So that we could already have a market captured for the event,” said Ampuan.

According to Ampuan, this year’s Halal expo was organized to increase the public’s level of awareness of Halal as well as to give better position of the Philippines, especially Davao, in aligning programs for Halal tourism, one of the fastest growing global tourism concepts. More importantly, for this year the event aims to gather various players and stakeholders of the tourism and trade industry with the goal of showcasing a wide range of Halal food, products and services from local and international companies.

Ampuan said that the first expo had a “very positive impact” as the Philippine Halal products and services gained international markets and was able to result to the growing interest of more international exhibitors from Malaysia and Indonesia.
“The new Indonesian consul general is very supportive,” Ampuan emphasized.
She added that the expo has also resulted to the strengthening of efforts of the government to promote Halal products and services through the Philippine Halal Export Development and Promotion Act (Republic Act 10817) signed by former president Benigno Aquino III on May 2016 which institutionalized the creation of the Philippine Halal Export Development and Promotion Board composed of Trade and Industry Sec. Ramon Lopez as the chairperson, National Commission on Muslim Filipinos (NCMF). Meanwhile, Sec. Yasmin Lao as vice chairperson, Agriculture Sec. Emmanuel Piñol, Health Sec. Paulyn Jean B. Rosell-Ubial, Science and Technology, Sec. Fortunato Dela Peña, Foreign Affairs Sec. Perfecto Yasay Jr., Tourism Sec. Wanda Teo, and Bangko Sentral ng Pilipinas (BSP) Gov. Amando M. Tetangco, Jr. sit as members of the board.

According to Ampuan, the board is now on the process of finalizing the internal rules and regulations (IRR) of RA 10817 with its first consultation on December 5, 2016 at Berjaya Hotel, Makati City. A series of consultations were also done at chosen cities across the country. For Mindanao, the consultations were held at General Santos City and Cagayan de Oro City last year.

Ampuan expects that the board will officially focus more on the Sharia aspect of Halal or the religious law governing the members of the Islamic faith rather than the technical aspects such as export and promotion.

“A product or service cannot be officially declared Halal if there is no Sharia aspect,” stressed Ampuan.

The United Islamic Center president also expects that the Philippine Halal will be included on the $3 trillion road map for the global Halal market mark by 2021.