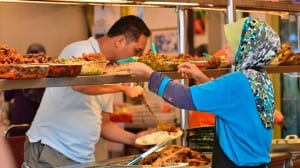 MANILA, Philippines – The lack of organized halal certification in the Philippines could prevent the country from taking advantage of the integrated Association of Southeast Asian Nations (ASEAN) economy in 2015, a Muslim Filipino consumers’ group said.

The reason: more than half of the world’s Muslim population come from the regional economic cooperation. They would ditch halal Filipino products if neighboring countries like Malaysia have better-calibrated certifying bodies, according to Potre Dirampatan Diampuan, board member of the Alliance for Halal Integrity in the Philippines (AHIP).The Philippines has only 3 accredited halal-certifying bodies.

“We’ll dwarf because of ASEAN. We’ll not have an advantage because of the borders we made,” she told Rappler.

Malaysia remains to be the world’s friendliest destination for Muslim travelers, according to a study conducted by Crescentrating this year, and Diampuan says they envision the Philippines to be just like that.

BE UNIFIED. The newly-formed Alliance for Halal Integrity in the Philippines wants a uniform standards for halal certification in the country.

Unlike Malaysia and Indonesia, the Philippines does not have a government agency that has control of giving halal certifications. This was after the Supreme Court in 2003 nullified a law that gave the Office on Muslim Affairs (now the National Commission on Muslim Filipinos or NCMF) the power to regulate products acceptable to Muslims.

Today, certifying products as halal have been left to Islamic non-governmental organizations.

Alejandro Deron, AHIP president, said there are actually 18 halal-certifying NGOs in the country which are recognized by the Department of Trade and Industry (DTI).

However, out of the 18, NCMF accredits only 3 of them:

Regulating products, especially food, to meet the Islamic standards goes beyond testing the presence of pork substance in samples. Certifiers also need to detect acceptable level of alcohol and blood in the products – all requiring stringent laboratory processes.

The ease of finding halal food, and even finding a place to perform Islamic prayers, remain a challenge in Christian-majority Philippines, except in the Autonomous Region in Muslim Mindanao.

The Philippines, said Diampuan, needs to catch up.

“They should know that it’s not about religion. It’s about being inclusive. Sixty percent of ASEAN’s population are Muslims,” she said.

“Halal means inclusion. It’s for everyone. It could also unite us together in ASEAN,” she said.

AHIP is slated to gather some 300 halal industry stakeholders during the Philippine International Halal Forum on Monday, October 27. – Rappler.co