SEVENTEEN companies have expressed their intent to set up shop at the Zamboanga City Special Economic Zone and Freeport (Zamboecozone) while two current locators are planning to expand operations. 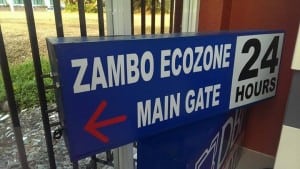 It’s business as usual on Sunday morning in downtown Zamboanga City, known to locals as Pueblo. Homegrown Shoppers’ Plaza is one of the oldest department stores in the city. — Karel B. Mellanes
The ecozone is targeting for the near term making firm progress on the applications of these interested parties, Alfonso A. Marquez, information officer of the Zamboecozone Authority, said in an e-mail interview with BusinessWorld.The companies planning to locate inside Zamboecozone are in various stages of evaluation by the ecozone’s board, awaiting regulatory approval, or pending documentary and financial requirements.

Attracting and retaining investors has been a struggle for the city as it staggers from the September 2013 siege staged by a faction of the Moro National Liberation Front (MNLF), longstanding power interruptions as well as a water supply shortage last year. In the Board of Investment’s list of 2014 approved projects, none chose to locate in Zamboanga City.

The MNLF attack lasted for almost three weeks and left thousands displaced while rotational brownouts stretched up to 10 hours a day in the early part of 2014.

For his part, Zamboanga City Chamber of Commerce and Industry Foundation, Inc. President Edwin To pointed out that the main considerations for a business enterprise is not the power cost but the return on investment given the accessible market.

“What’s important is to keep power and water within reasonable cost, so that we will be competitive as a city with good return on investment, if we have the market,” Mr. To said.

“The question we should be asking is, is there a market? Is it big enough to cover the overhead?” he added.

HALAL HUB
In the long term, Zamboecozone is aiming to increase its dealings with food processors who follow the Halal standard, and developing as a transshipment area for their products.

“The Zamboecozone and Freeport intend to position themselves as the center of Halal industries in the Philippines,” Mr. Marquez said.

The freeport authority’s primary infrastructure developments planned this year include the road network for the 664-hectare 2nd Industrial Park that will be designated as the “Halal Zone”.

Another priority project is the construction of 1,000-square meter warehouse-type buildings that can be modified to the requirements of locators.

Aside from food, the Halal Zone is targeting other industries such as cosmetics and personal care, pharmaceuticals, logistics, and Halal travel & hospitality services.

BIMP AND BANGSAMORO
At the same time, Mr. Marquez acknowledged that medium- to long-term plans will have to be complemented by the construction of a seaport for cargo movement.

“The world class type international seaport is envisioned to be a major hub for the handling of transshipped cargoes in the BIMP-EAGA (Brunei-Indonesia-Malaysia-Philippines East ASEAN Growth Area) Region and beyond,” Mr. Marquez said.

Last year, several BIMP-EAGA initiatives were undertaken to renew and re-develop ties among the four nations in preparation for the economic integration of the Association of Southeast Asian Nations starting December 2015.

Further, the ecozone administration believes that the proposed neighboring Bangsamoro territory will also boost the Halal industry even if Zamboanga City officials and residents have indicated their refusal to become part of the territory.

“The Bangsamoro territory will have a positive impact on potential locators in the zone, particularly in the industry that will cater to Halal,” Mr. Marquez said.

Zamboecozone, a 15,000-hectare agro-industrial complex established in 1995, is also pushing for more manufacturing and processing operations, particularly those that will add value to the Zamboanga Peninsula Region’s agricultural products such as rubber, seaweed, coconut, fish, mango and abaca.