Skip to content
By Hannah Wright, senior researcher at ESRO

Can British Muslims be seen as a market segment?

Yes, according to Shelina Janmohamed of Ogilvy Noor, a “bespoke Islamic branding practice”, who has called British Muslims a “segment crying out to be served”. Ogilvy Noor has also found that, globally, 90% of Muslims asked said that their faith does affect their consumption habits. 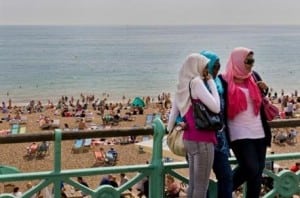 But can we really see Muslims, globally or in this country, as a segment across all these sectors? That is to say, is their religious identity the most important and influential factor in their consumer behaviour when it comes to not only food, but fashion, and lifestyle choices too?

My research set out to answer such a question using qualitative interviews with 11 males and 12 females, all aged between 16 and 21, in both London and Bolton, Greater Manchester. All were second generation British Muslims, from a range of ethnic backgrounds. I interviewed my respondents in small peer groups of two or three, in order to facilitate comfortable discussion.

When asked to describe themselves, and the groups in society they identified with, “Muslim” or “Islam” was, in every case, one of the primary identifications used.

“Religion is a lifestyle. It affects how you shop, how you eat, how you live on a daily basis.” (Male, London)

”[Islam] distinguishes you from other people in society. Not in a negative way but like, you’re proud of it, that’s your religion. And it has a positive effect on your life and what you do.” (Female, Bolton)

Given the primary and overarching importance of Islam to my respondents, one might reasonably expect faith to be the main influence on the purchase decisions of young British Muslims. But the picture that emerges is far more complex.

Islamic identity was felt to be more important in some areas of life than in others. Due to the clear rules within Islam regarding the consumption of certain food types and religiously sanctioned method for slaughter, food was universally felt to be one area where Islamic identity had a major role:

“I don’t go into non-halal places to eat. You just never know what is going on back there, I’d rather the whole place be halal and then I’m comfortable.” (Male, Bolton)

Further underlining the importance of food, it was highlighted that although this was currently the area with the most Muslim-friendly products available, there was still a long way to go before such products really became a part of the mainstream. McDonald’s was a frequently cited “no go”, with responses to the lack of halal meat on offer there ranging from complete avoidance to adopting more vegetarian habits.

Finance was not felt to be an area where Islamic identity was particularly important, despite the rise of the Islamic banking sector, both globally and closer to home in London.

After food and finance, the third ‘F’ of Islamic marketing — fashion — was a discussion that resonated much more with female respondents than male, all of whom noted Islam’s onus on modesty.

None of my respondents expressed a desire to wear traditional clothing associated with their ethnic origins, nor did they demonstrate a particularly strong attachment to generically ‘Islamic’ clothing, such as abayas. Most were navigating a tricky path between fashion and modesty that they felt reflected their place as young Britons, who were also Muslim:

“You need to be modest, so nothing too tight or too revealing […] but you can just go to Next, River Island, H&M and if you like a tight top, with short sleeves, you just wear a blazer over it.” (Female, Bolton)

Such an approach, navigating a fine line between various aspects of their identities, is much more reflective of the reality for young British Muslims than describing them as a segment purely defined by their religious identities. Mainstream British identity was important to my respondents, and they wished to participate fully in British life, while observing the requirements of their faith.

More must be done to discover how brands can engage with their Muslim consumers, and integrate their desire for participation in mainstream culture with their Muslim identity. Simplistic segmentation by religious affiliation does not capture the extent of the diverse and nuanced identities of Britain’s young Muslims.