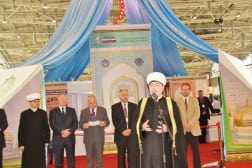 Russia hosted the Moscow Halal Expo 2012 on June 7, 2012. Sheikh Ravil Gaynutdin congratulated attendants and informed that the Halal movement in Russia started in 2002 after a meeting with Russian President Vladimir Putin.

The mufti noted that Halal is popular all over the world for its high health standards of products.

Muhammad A. Al-Kankhala, a member of the Saudi Arabian royalty responsible for food and medicine, thanked muftis for the invitation and noted the importance of the meeting.

Chargy Jankurtaran, Chairman of the General Secretariat of the Institute for Metrology and Standardization of Islamic States, said that Halal needs a common standard.

Abu Bakr Riger, Chairman of the European Union of Muslims and member of the SalamWorld Executive Committee (general partner of Moscow Halal Expo 2012), emphasized that the need to preserve Muslim traditions is essential for the whole world. A mass Muslim network would solve many problems of the international trade.

Rushan-Khazrat Abbyasov, Deputy Chairman of the Council of Russian Muftis, noted that the number of Halal consumers increased by 30% this year. He invited Gaynutdin to cut the red line opening the exhibition.

The Russian Ministry of Foreign Affairs, Moscow government and international Islamic organizations support the third exhibition. Delegates come from 30 states. There will be about 20 business, cultural and contest events, including the Best Halal Product of the Year Award.

The exhibition will continue until June 10.