The 1st International “Halal” Congress took place in Russia on June 12-13, 2012 in the framework of which the conference “Global Experience in Halal Certification: ways to the Unified Certificate” was held.

Guests from various countries arrived to the capital of Tatarstan to discuss issues related to the Halal certification. The event was visited by about 20 guests, among which are the heads of certifying organizations from Turkey, the Netherlands, Austria, Brazil, Australia, South Africa, Japan and Pakistan. In addition to the foreign guests participated in the event there also were the heads of the Committees on the Halal standard of the Muslims Spiritual Boards, representatives of the Russian public organization ‘Business Russia’, the Tatarstan regional branch of ‘Opora Russia’.

The experts, who arrived in Kazan, shared experiences on Halal certification and discussed the challenges that they are facing in different countries. Two specialists from SMIIC (The Standards and Metrology Institute for the Islamic Countries) also participated in the Congress. Mr. Yasin Zülfikaroglu presented SMIIC activities for the heads and representatives of the international Halal certification bodies. After the presentation Mr. Yasin Zülficaroglu and Ça?ri Cankurtaran answered questions of the Russian participants.

The Congress included various presentations, speeches and discussions. The participants actively discussed issues of export and import, problems that producers of Halal products face. The participants also shared experiences in the field of certification of various products under the Halal brand.

The ways to solve problems and challenges that have accumulated in the field of Halal have been suggested during the conference by the certification bodies. Therefore, the Islamic Chamber Research and Information Centre in Halal World have initiated creation of the working group on Halal issues. 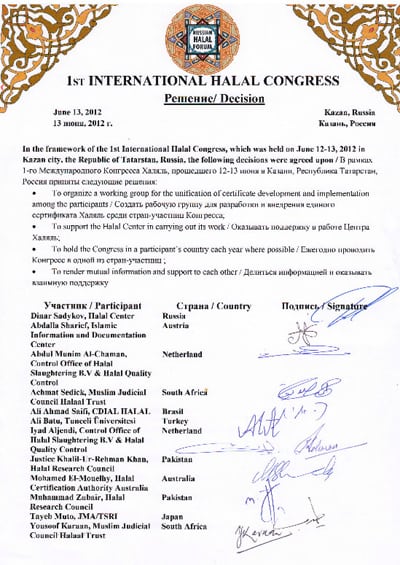 After two days of the Congress, it culminated with the Decision signing by the key certification bodies. Following decisions were made:

It should be noted, that 1st International Halal Congress was supported by the All-Russian Public Organization ‘Business Russia’, the regional branch in Tatarstan of All-Russian Public Organization of Small and Medium-sized Entrepreneurship ‘Support of Russia’, the Central Spiritual Board of Muslims of Russia, the Coordinating Center of Northern Caucasus Muslims, the Russian Association of Islamic agreement, Islamic High Council of Moscow and Moscow.

The Congress was organized by the Islamic Chamber Research and Information Centre in Halal World. It should be noted, that all activities of the Center is for the benefit of Russian export relations with the Islamic, Arab and European countries.