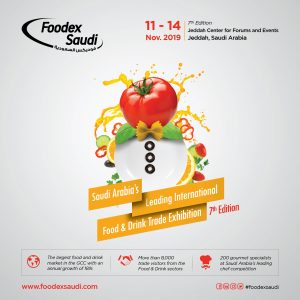 Singapore, India, China and Uzbekistan are preparing for their first official participation in the seventh edition of the largest Saudi international food and beverage event

Jeddah – Saudi and international official bodies have started preparing to participate in the largest international food and beverage exhibition in the Kingdom; “Foodex Saudi”. The Exhibition will be held from 11 to 14 November at the Jeddah Center for Forums and Events, and will be witnessing an exciting competition between local, regional and international corporations to provide the latest innovations in the food industry, amid the keenness of a large number of investors in the world to be in the Saudi market.

The Organizing Committee of “Foodex Saudi 2019” has announced a wide participation this year from countries that will be participating for the first time in official wings with the support of their governments, headed by Singapore, India, China and Uzbekistan. On the local side, the Exhibition is honored to receive the support and participation of local authorities and bodies, including the Saudi Food and Drug Authority, Al Watania Agriculture Holding Company, the First Milling Company, King Abdulaziz University, College of Tourism, the Saudi Arabian Chefs’ Association and the World Association of Chefs Societies; with the participation of its President, Chef Thomas Gugler, as he presides over the international chefs competition which is held in the exhibition annually. Moreover, it is expected that several governmental and private bodies will join for the big event that has been in preparation for many months. 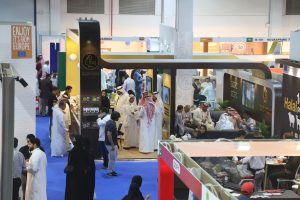 Mr. Mohammed Talaat, Director of “Foodex Saudi”, expected that the event will exceed 600 brands from 50 countries. He stressed that the event, hosted by Jeddah for four days, represents a unique trading platform for exhibitors from all over the world and is witnessing an exciting competition to the global companies to seize their chances in the largest food market in the Gulf and the Middle East, as the Kingdom is characterized by economic and consumer capacity.

Roa Alhazmi, member of the Organizing Committee and Director of Public Relations at Sunaidi Expo & Conferences, pointed out the great expansion of the “Foodex” exhibition since its first edition 7 years ago. She stressed that the exhibition has contributed to the consolidation of the status of the Saudi food market as one of the largest and most promising food markets in the world. As it offers traders and specialists in the food and tourism industry the opportunity to exchange business and expertise and discover the latest products and technologies in the food industry provided by more than 50 countries.

The Foodex Saudi Exhibition includes accompanying events held annually. Among them are the largest international chefs’ competition under the auspices of the World Association of Chefs Societies and the Saudi Chefs’ Table, as professional chefs, who represent the most famous hotels and restaurants in the Kingdom, compete in a professional atmosphere. The

exhibition also honors the creators through the Foodex Saudi Award for Excellence in the Food Industry.

In November, the Exhibition will display the latest products of fresh, chilled and frozen foods, dairy products, services and equipment for food, canned foods, meat, poultry, snacks and sweets. The event will last for 4 days with 200 food specialties in fine dining and more than 9,000 visitors representing different sectors.