The people of Saudi Arabia are furious with the McDonald’s fast food chain for a toy which they say desecrates the name of Muhammed, the Prophet of Islam. They are demanding retribution. 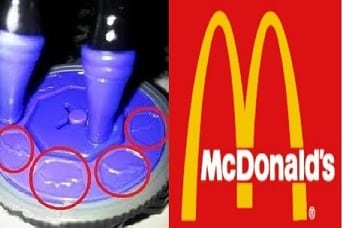 “[the McDonald’s fast food restaurant] abused the Prophet Muhammad by placing his name at the base of a toy that is being distributed as part of the Happy Meal, a toy which steps on the name ‘Muhammad.’”

The toy is a blue super hero on a blue base.  The toy looks like a Mighty Morphin Power Ranger samurai warrior. The toy stand on one of its legs and the other leg hangs over the side of the base.  When a lever is pressed the toy’s other leg smahes against the base of the toy in a stomping motion.

The Saudis are claiming that the base of the toy, where it stomps its foot, is covered with the name Muhammed.  They claim the name is written several times in circles all over the base so every time it stomps it is stomping on Muhammed.

The toy had been distributed for several days and until today no one had noticed the name written on the base of the toy.  After its discovery by Saudi Muslim authorities they lunched several campaigns against the restaurant “in response to the savage attacks on the noble prophet”.  The campaigns were called “Help your Prophet” and “Together in support of the Prophet.”

In response, “Saudi McDonald’s” has taken the toy out of circulation at all of its restaurants stating it was important, “to safeguard against any accusations or misunderstandings.”