Skip to content
By Syarafana Shafeeq – The Business Times
My Outlets Express is venturing overseas while aiming to make Singapore a global hub for the distribution of halal products. 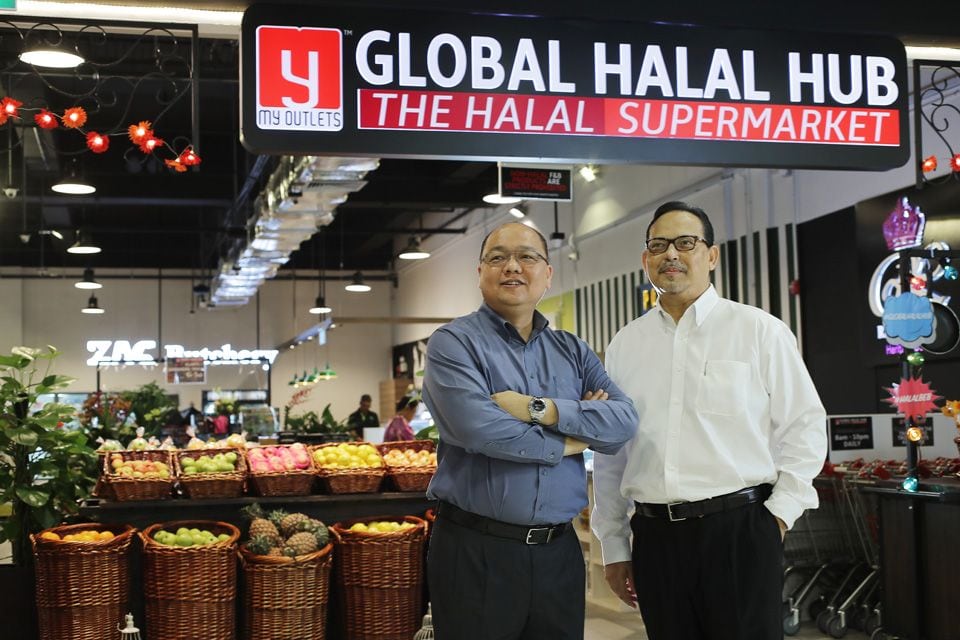 Chairman Ronnie Faizal Tan and CEO Malek Mattar of My Outlets, which runs the Global Halal Hub – the Halal Supermarket that features certified halal products from various countries for the retail as well as wholesale buyers. PHOTO: KELVIN CHNG
SINGAPORE’S biggest up-and- coming halal industry player My Outlets Express Pte Ltd is stepping up its game with expansion activities in Japan, China and Korea, but the heart of its business still lies within the Lion City.

The halal market is one of the world’s fastest growing markets, with US$2.77 trillion total market value for halal food and commodity trading reported annually.

My Outlets’ founder and chairman Ronnie Faizal Tan started the company in 2013, with the mission of helping SMEs, especially those in halal F&B, distribute their products.

That mission of being a food distributor has now evolved into building a global halal hub, allowing halal food manufacturers and exporters to distribute their products through the company’s value-chain channel of supermarkets.

The first venture opened in 2014, in Paya Lebar, in the form of a minimart. Two other outlets quickly followed suit the year after, in Bishan and Woodlands. Realising that this was a market with potential, the company ventured into bigger territory in 2016, opening a 10,000 sq ft supermarket in Chai Chee.

“We wanted something bigger, so we could offer a more comprehensive range of products for our customers, so we decided to take a step forward and invest in a bigger space,” said Malek Mattar, chief executive officer of My Outlets.

The idea for an all-halal supermarket first came to Mr Tan when he was travelling. “I had been travelling around the world for a while, but still struggled to find a supermarket that sold all halal-certified products, which planted a question in my mind as I knew that the global halal market is huge and still growing, and the Muslim population is increasing,” said Mr Tan.

There are about 1.83 billion Muslims globally, and an estimated Muslim population of one billion in Asia.

Following My Outlets’ success in Singapore, the chain ventured into Asia, opening three supermarkets in Chiba, Japan as well as planning expansion in Johor Baru, Beijing, Seoul and Guangdong.

However, even with new expansion plans in various parts of Asia, Singapore is still its target market.

“Singapore has a very good strategic positioning in promoting products, especially halal products. We believe there is a need for Singapore to become the halal hub for distribution and representation of brands globally,” said Mr Tan.

Currently, 80 per cent of the company’s sales come from Singapore, with the remaining 20 per cent from overseas operations.

Manufacturers in the halal industry face a lot of challenges, ranging from certification procedures, sanitisation and standardisation, but understanding market demand is one of the bigger challenges, said Mr Mattar.

“Everyone wants to do halal nowadays, since it is a big and growing market, but the question is whether the market is ready for these halal products, and whether manufacturers have the ability to market their halal products. That’s where we come in; we wanted to create a marketplace to support and assist all halal manufacturers,” said Mr Mattar.

My Outlets has also gone into the business of acquiring restaurants with the intention of making them halal-certified. Muk-Bang Korean Restaurant is one of the restaurants that have been acquired by the company, and sales have tripled after the acquisition and halal-certification.

The company has also ventured into e-commerce with an online marketplace for halal products and services, Haladeen.com. It allows vendors to sell directly to consumers through a monthly subscription fee.

Haladeen is targeted at a global market, with multi-language support to solve possible language barriers for users. Products offered range from food & beverage to health and lifestyle.

Business was not always a smooth ride, with adversity hitting My Outlets with the passing of its former chairman. “It was a big setback for us, as we were growing at a very startup mode, and we were motivated and guided by our ex-chairman. His overnight passing meant that we were left on our own, but we managed to strive through and turn things around,” said Mr Mattar.

Being in the halal industry also brought challenges in itself, with sensitivities in the Muslim community to be addressed.

“Because we are in the business of halal, it brings out a lot of sensitivities and ethical issues among Muslims, and so we need to be aware and careful about our approach and be mindful of issues that might stir emotion within the community,” he added.

These challenges have not hindered the company, with sales for My Outlets increasing from less than S$1 million in 2015 to about S$6 million this year.