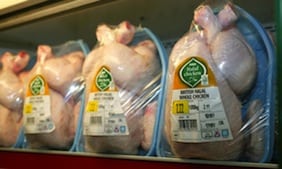 A decision taken in late 2012 by the European Union (EU) to up the voltage by 50% given by European slaughterers to chicken before they are slaughtered would render such chicken unfit for Muslim consumption. This was the decision of the Muslim Judicial Council Halal Trust (MJC) following notice given to all European slaughterers by the EU last quarter. The increased voltage came into effect on 1 January and has particular significance for Muslim consumers given an increase in European imported “halal” products into South Africa seen recently. Currently, the MJCHT is the only halal body in the country that certifies imported meat.

“The Islamically acceptable, maximum stunning mili-amperes (mA) for chicken was set on 100mA, a stunning-amperage that ensured the chicken was stil alive before slaughtering it. However, the EU legislation increase this by 50% and it means the chicken is effectively already dead when it is slaughtered. This is unacceptable under Islamic law if the chicken is to be halal,” acting head of the MJCHT, Sheik Achmat Sedick explained.

Sedick explained that for the meat to be regarded as halal, the animal must still be alive when it is slaughtered, or it would be rendered as carrion, which is haram for Muslims to consume. The EU’s decision led to European ulema calling a conference on December 3 in Rotterdam to address the matter. “The MJC was aware of the European ?alal Food Conference in Rotterdam. Our colleagues in Turkey informed us that this conference was for the ‘ulama from Europe specifically who wanted to challenge the EU ruling on the stunning legislation. Hence, they kept us apprised,” Sedick reported.

However, head of the MJC’s Fatwa Department, Maulana Yusuf Karaan gave input to the conference on the local view, stating that they were “extremely perturbed”by the new regulations and wholeheartedly supported European ulema. “We believe, like you do, that for a chicken to be permissible for Muslims to consume, it is a very strict condition that at the time of slaughter, mechanically or by hand, that the chicken be alive with ‘Al hayatul mustaqirra’,” he explained.

“We even believe that stunning an animal before slaughter is permissible in order to save the animal from undue pain and hardship, but at the time of slaughter, it should be fully alive. Should there be any doubt as to whether the chicken died from the electric current or the slaughtering knife, or any other reason, it will not be fit for Muslim consumption.”

The alim therefore endorsed the stance taken by European ulema and called on all Muslim organisations in Europe to reject the new EU regulations and to bring such objection to the notice of government institutions. “In view of the fact that much of Europe’s exports reach Muslim countries, such countries should be made aware of all these developments,” Karaan urged.

“The MJC in SA is often called upon to sanction and endorse imports of halal meat into our country and we can assure you that we will be exceptionally vigilant about imports from European countries in future and will most certainly not sanction such chicken into South Africa,” the statement said categorically. Sedick reiterated this position, adding that the stunning-amperage was an important element in the criteria it has for any plants abroad from where chicken are imported with the approval of the MJCHT, Brazil being a key source.

“We are also aware that especially Middle Eastern countries are major importers of European chicken. We are in communication with our counterparts there regarding this matter.” Sedick said he would be attending the World Halal Council (WHC) meeting in Turkey on the 23 – 24 February where this matter was scheduled on the agenda.

During the halal slaughtering process, the chickens are often stunned by using an electric water bath. The law required, until January 1, 2012, a frequency of 100 mA. This frequency causes a major risk to the life of the animal. According to ulema at the European Halal Food Conference in Rotterdam, in reality the practise at halal slaughterhouses is to use a lower frequency. But the new law demands an increase to 150mA, which not only means the chicken is effectively dead, but is also very bad for the quality of meat obtained.

“Therefore, all slaughterhouses in the Netherlands are looking for an alternative way of stunning the chickens. Now we are facing a dilemma that is forced upon us by the new regulations. Because we can’t eat dead animals and we cannot slaughter on a large scale without stunning – this is only possible for very small slaughterhouses – many slaughterhouses will soon use gas stunning methods.

“Presently several gas stunning systems are available – with or without the addition of oxygen, but all the systems have the same goal, which is stun the animal until it dies. Therefore, this system can never been used for halal slaughtering. If we do not stop this new legislation – which brings with it a  further decline in religious freedom, it will be almost impossible from January 2013 to buy halal chicken at most halal butchers (here),” the European scholars said in a statement released after the Rotterdam conference.

The European Halal Food Conference in Rotterdam stated emphatically that eating halal was an important part of worship in Islam. “The slaughter method of Muslims has many conditions, one of which relates to the health of the animal being slaughtered. An animal that is dead before it is slaughtered is labeled non-consumable within Islamic sciences in a way that is unanimously and without any doubt. Hence the new level of stunning is unacceptable, neither are alternate methods like gas stunning,” the group said, adding the following recommendations:

– “Firstly, we do not accept that halal meat is made practically unattainable for the Muslim citizens, because these citizens enjoy the freedom to profess their faith as enshrined in European treaties.

– “Secondly, the stunning methods used by European legislation offers lead to death to the animal to be slaughtered, leading to the haram status of the meat, which is why they cannot eat it.

– “Thirdly, we call the European Union to abandon the aforementioned new laws and regulations.

– “Fourthly, we call the authorities in the Islamic countries to take a clear stance regarding these new European laws and regulations. We also ask European countries to provide their Muslim citizens full freedom in practicing their faith concerning halal food and drinks.

– “Fifthly, we call Muslim organizations in Europe, other relevant institutions and research bodies to fulfill their social obligation by openly rejecting these new laws and regulations.

– “Sixthly, we call the organizations engaged in the halal certification of meat and food in Europe and the mosque organizations that are involved in this business, to make their rejection of these laws and regulations heard loud and clear and to undertake legal action in order to protect the rights of the Muslim European citizens.”

The statement was signed by the Association of Imams Netherlands, the European Council of Moroccan Scribes, the Cooperating Islamic Organizations in Europe, the High College of Islamic Studies in Austria, the Islamic University of Rotterdam and the Council of Islamic Scholars Netherlands. VOC (Munadia Karaan)