Modest fashion has been recognised by international brand Dolce and Gabbana as a new potential market, and in 2016 the fashion label launched a luxury range of hijabs and abayas targeted at the Muslim market.

The popularity of this line of clothing can in part be attributed to online media platforms, where numerous bloggers have carved a niche by celebrating their identity and culture through the clothes they wear.

Summer Albarcha (HipsterHijabi), a fashion blogger from the US, has 410k followers on Instagram, promoting her take on modest fashion.

Another is Dina Tokio, a British fashionista with 1.3 million followers on Instagram.

Local bloggers have also been able to generate a healthy following.

Joburg-based fashion designer Fatima Wadee-Wajaa is the founder of fashion label Zamaan (life), which she established in 2014. She holds a degree in Medical Science from Wits University and the University of Pretoria

She has garnered international recognition for her label and was invited to showcase her designs at the Mercedes Benz Fashion Week in Turin in Italy this year.

Wadee-Wajaa said dressing modestly was instilled in her from a young age, through her religious and cultural upbringing.

“I see fashion as a personal representation of an individual’s personality and style. It’s the picture that paints a thousand words of who you are and what you represent.”

“Modest fashion being a growing mainstream trend internationally also throws a spotlight on modest fashion designers locally, allowing them to gain access to, and cater for, a more diverse market.”

She would like to see modest fashion as something that is continuous and not just a trend or a “fad”. “The key element in modest fashion is that we design with the understanding that a woman would like to be appropriately covered yet look fashion forward and trend relevant.”

Zamaan will be available at Hse of Bespoke in Woodstock from October.

Sarah Jasmin Nwajei has been using her platform to showcase her take on modest fashion since she was 17 years old.

The Ottery resident, now 21, said after being bullied by peers and being sexually abused as a teenager, her platform became a way to express herself.

“Life wasn’t always easy and after being inspired by local bloggers, it was a good outlet for me. I try to make my platform all inclusive and not just target Muslim women. I’m trying to show people it’s not hard to dress modestly and still be stylish.”

Nwajei, a stylist by profession, has worked with Woolworths, Billabong and Prada.

“I’ve worked with local and international brands and find that my local collaborations have been challenging. Most local brands and bloggers focus on followers and likes on social media and many people in the industry are really petty.”

Nasheetah Joseph-Kammish, creator of the Infinite Collection label, said the Cape Town market could be tough because there’s competition to keep designs “fresh”.

“Modest fashion has been around for ages, it’s just marketed better now. Since some international brands have come on board, the term is now recognised.” 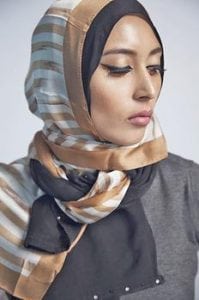 Blogger Zainab Slemang van Rijmenant said some people may not call her modest, but she does cover her body for religious purposes. She said women have options when it comes to creating stylish looks, without revealing too much.

“At the moment I’m in love with oversized shirting, bell sleeves and frills. They’re all trendy and pair well with almost everything I already own.”

Her blog, David & Radcliffe, established in 2015, is targeted at young women.

Slemang van Rijmentant, said that despite some criticism, the modest fashion platforms educate young girls, and that the modest style can be adopted by many women – regardless of religion.

“I see these blogs as an opportunity to educate young girls on modesty and humility. I know many parents who would much prefer to see their daughter’s role model covering up their body than revealing too much skin.

“Modest fashion is also not confined to Muslims, so these blogs are catering to a varied and big audience,” she said.

Slemang van Rijmentant said the popularity of modest fashion was an opportunity for the fashion industry.

“Modest fashion is having a moment and it would be sad to see this opportunity lost if South Africans in the fashion industry don’t pick up on it now.”