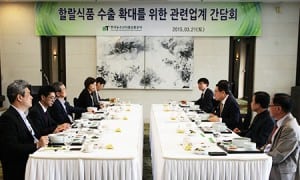 The Korea Agro-Fisheries and Food Trade Corp. (aT) has stepped up efforts to help increase outbound shipments of halal certified food products to Islamic countries.

To do so, the state-run food export promotion agency has been encouraging domestic food companies to develop and produce halal food items.

The company has provided food producers with a wealth of information on the halal market and plans to boost marketing activities to promote the quality and safety of made-in-Korea food items among Muslims.

This should open the door wider for food firms to make inroads into the Middle East and Southeast Asia, where the vast majority of Muslims reside, aT said.

Company CEO Kim Jae-soo held a meeting on March 21 with officials from state agencies and private food firms to discuss ways to increase public-private sector cooperation on the production and sales of halal food.

“The global halal food market is a blue ocean for local food companies,” Kim said. “We will closely cooperate with the Ministry of Agriculture, Food and Rural Affairs and hear opinions from private firms in order to introduce effective measures to increase food exports to Islamic countries.”

“Halal” means lawful or permissible in Arabic, and certification is given to only food items that are slaughtered, processed or manufactured in accordance with Islamic law. Muslims are required to consume only halal food. Food makers cannot add pork, alcohol or meat-derived food ingredients such as collagen.

In order to export food products to the United Arab Emirates (UAE) and other Islamic countries, Korean food firms must first receive halal certification from each government.

There are more than 300 organizations worldwide that are entrusted to issue halal certifications on behalf of each government. In Korea, the Korea Muslim Federation and three agencies hired by halal certification institutions abroad can issue accreditation.

About 133 food producers here have obtained certification on a total of 404 items as of 2014.

Last year, Korea exported a wide range of halal-certified food products worth $680 million. It plans to increase the amount to $1.23 billion by 2017 as the global halal food market will expand to $1.6 trillion.

“We will soon open an office in the UAE to use the nation as our export base,” Kim said. “aT will conduct extensive halal market research and extend financial support to small firms seeking to get halal certification. We will hold a wide array of promotional events in the Middle East and Southeast Asia to publicize the high quality and safety of Korean food items.”

During President Park Geun-hye’s visit to the Middle East in early March, Korea signed an agreement with the UAE to cooperate on the production and sale of halal food.

The accord is widely expected to make it easier for domestic food producers to gain certification and ship their goods to the UAE and other Arab nations.

Since then, aT has been drawing up follow-up measures to expand Korea’s halal food exports.