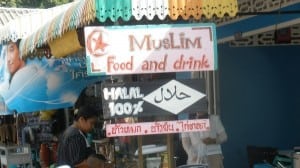 In recent marketing campaigns, Thailand has been aiming to attract diverse categories of tourists including Muslims.

“The land of smiles,” as the country is sometimes known, has stressed its openness and attractiveness to a wide range of tourists who are sometimes rejected by surrounding countries.

Thailand, a predominantly Buddhist country, is trying to tap into the lucrative market of Muslim travelers. Unlike neighboring Myanmar, where anti-Muslim feelings have recently spilled over into violence, Thailand presents itself as a Muslim-friendly country.

It is already the eighth most popular country with Muslim travelers, particularly Gulf Arabs, according to Crescentrating, an online travel guide for Muslims.

Thailand is aiming to increase these numbers by marketing itself as a place where halal food (complying with Islamic requirements) is readily available and “halal spas” offer separate facilities for women and men.

All the leading shopping malls in the country have Muslim prayer rooms, as well as in the beach resort city of Pattaya.
Meanwhile, Crescentrating’s study ranked Bangkok’s Suvarnabhumi Airport as the most Muslim-friendly airport in a non-Muslim country.

Its tourism authority, which has an office in Dubai, organized a month-long festival of Thai cuisine in the UAE earlier this year to encourage visitors from the wealthy Gulf state.