It was admitted to “The Halal Hotel” by the Gulf Halal organisation from Dubai, which assures constant and exacting standards of high quality for visitors.

The hotel aims to reach high-end Muslims and non-Muslims in Asia, the Middle East and Europe.

It targets occupancy of 70 per cent and total revenue of Bt198 million this year. It plans to break even within 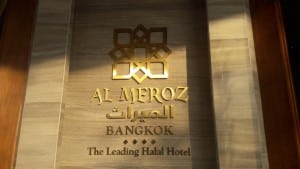 This group also claims a large share of the world’s consumer spending.

“There isn’t any [other] halal-friendly hotel to cater to Muslim travellers in Thailand, so we do not want to miss out on a huge opportunity in the halal tourism market,” he said.

More than 60 per cent of the hotel’s staff are Muslims, led by Sanya Saengboon, managing director and general manager of the hotel.

Half of the guests come from Europe and half from Asia, including high-end Muslim guests with estimated spending of Bt10,000 per day.

The hotel has allocated Bt50 million for marketing this year, aiming to promote the halal-hotel concept in both domestic and international markets.

There are no competitors in Thailand, but some offer halal services in Japan and South Korea.

“For marketing strategy, we are now working closely with the Tourism Authority of Thailand and other tourism authorities to promote Thailand as a competitive destination” for those wanting halal services.

“Our target group is Muslim and non-Muslim guests from Asia — Indonesia and Malaysia – from the Middle East and Europe – France, Germany and England,” he said.