Pointing to climate change, inequalities and other serious challenges, United Nations Deputy Secretary-General Amina Mohammed told a forum on Thursday Development that “the clock is ticking” down, to making the 2030 Agenda for Sustainable Development.

“Climate change is ravaging the planet… staggering numbers of children and youth – especially girls and young women – still lack access to basic education and healthcare services, [and] people in many countries are starved of economic opportunities, decent work and social protection measures”, she told the  2019 ECOSOC Partnership Forum, where governments, business representatives and other influencers met to discuss how partnerships can best advance and the 17 (SDGs).

Under the theme, “Partnerships Driving Inclusive Implementation of the SDGs”, the Forum will capture key policy messages to inform the High-level Political Forum (HLPF) in in September.

“Our task is immense, but many of the pathways to change are in plain sight”, she asserted, adding that while “success is still possible”, it requires difficult conversations around “the need to fill partnership skillset gaps, tackle financing shortfalls, and address data deficiencies”.

The economic, social and environmental dimensions of sustainable development call for “a fully integrated approach” that engages everyone.

“Partnerships are critical for achieving progress across the full agenda” stressed Ms. Mohammed, calling SDG 17 on partnerships, “the ‘connective tissue’ which will ensure an integrated and holistic approach to sustainable development”.

The deputy UN chief shared four points for discussion, beginning with a commitment between the UN, governments, private sector and civil society to work together in a more coordinated and integrated way.

“The transformation we need requires us to acknowledge that everyone is a development actor,” she argued. “Governments alone cannot achieve the SDGs”.

Secondly, she pointed to the need to prioritize investments in platforms and coalitions that engage a larger ecosystem of partners.

“Investments in cross-cutting, high-return priorities have strong potential to unlock progress across multiple SDGs”, she stated, flaggin a range of areas, from quality education and health services to zero-carbon energy and environmental conservation.

“We must draw on the knowledge and experience of local communities and actors on the ground to ensure that we replicate and scale up the most promising models”, she emphasized.

Ensuring that the process to socialize the SDGs and strengthen ownership is “inclusive, transparent and accountable”, was her final point.

“All stakeholders, big or small should find a place to play their role and make their contribution”, she maintained.

She urged everyone to “reflect honestly about where we are falling short, because those shortcomings are also where the opportunities lie to make a difference”.

“Only with this kind of pragmatic approach will we realize our aspiration of leaving no one behind”, said Ms. Mohammed, with the reminder that promoting equitable access and equal participation by all, including the most marginalized, “is a fundamental ethic of the SDG era”.

Turning to capacity-building for vulnerable groups, she encouraged the forum to apply “a lens of inclusion and empowerment” to ensure that they “are put in the driver’s seat for SDG implementation”.

Recalling that young people, particularly women and entrepreneurs, are at the forefront of SDG progress, the Deputy Secretary-General concluded: “Let’s make sure we listen carefully to their vision and draw inspiration from their determination and commitment to creating a better world”. 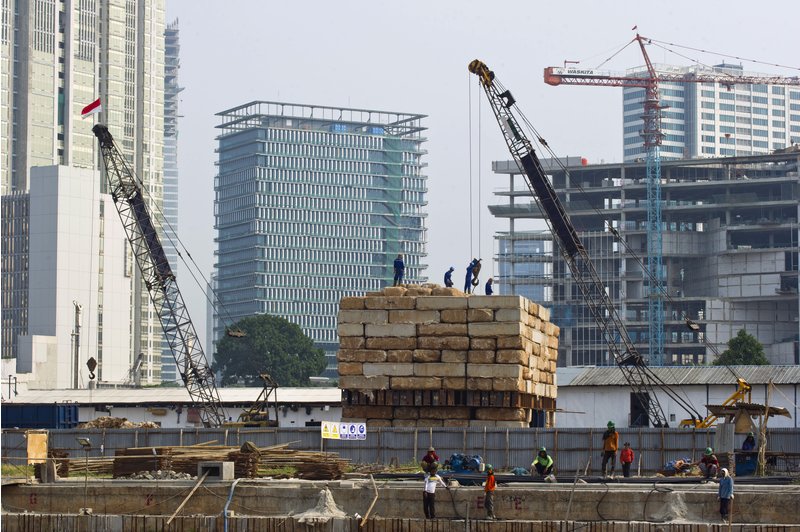 Workers contruct the foundation at a new construction site for an office high-rise building in the Indonesian capital city of Jakarta on September 5, 2014. Photo: Romeo Gacad, AFP

This year’s agenda, which addresses the World Economic Outlook (WEO) made public on Tuesday, is longer and more robust than previous reports issued during the ongoing IMF – World Bank meetings, Lagarde said. It is reflective of the uncertainty regarding a precarious financial recovery in 2020.

The agenda provided recommendation and guideline for global cooperation so that downside risks identified in the WEO, including unaccomodative monetary policy, unresolved trade tensions, high debt, weaker than expected growth in developing countries, and situations like Venezuela and Brexit, can be met with monetary response aimed at recovery and global financial growth.

Lagarde outlined both her recommendations for the global economy and the role the IMF will play in supporting monetary policy that fits within their goal of ensuring a growth rate recovery next year.

She noted that monetary policy that addresses the current economic situation cannot be a singular one, but should rather include various country-specific strategies.

The IMF’s rule for monetary policy, according to Lagarde, is “Do no harm. Do the right thing.” Much of that sentiment is based around the idea that monetary policy will not harm sects of people or the planet in its creation of financial stimulus and stability.

The agenda provided a guideline for the world to adopt a new multilateralism via macroeconomic policy, structure reform and an emphasis on market competition, innovation, and labor mobility.

It also included an initiative to improve global cooperation through an upgrade of international frameworks in order to create a more level playing field across borders. Lagarde posited that this must be accomplished by tackling trade tensions through reform in the World Trade Organization that modernizes a rules-based multilataleral trade system.

This is in addition to global financial regulations, debt transparency, limiting illicit financial flows, and a complete global reform on the current position of corporate taxation. At the center of this strengthening, Lagarde stated, is acknowledging the responsibility of an adequate global financial safety net and an IMF that supports countries in need.

The most important goal of the agenda, however, was the necessity for stronger joint action against issues that threaten not just financial, but all institutions.

Climate change, demographic shifts, cyber attacks, and tensions caused by conflict and migration require collaboration, and according to Lagarde, ought to include a simultaneous coordinated effort toward the United Nations-established sustainable development goals.

.@Lagarde: Sir David Attenborough’s work shows that nature is a chain and that every element of the chain matters. https://t.co/yrbqlvzm3d #1on1Lagarde pic.twitter.com/VLY01FkfUs

In a conversation with David Attenborough, an English broadcaster and natural historian, Lagarde addressed the idea of achieving a balance between nature and global economy, which will go hand in hand in the pursual of the 2019 agenda.

Attenborough expressed confidence that there is hope for a future with a stable global economy and a progression toward maintaining the global temperature.

The hope is in the youthful generations, Attenborough said, since it is in the youth who understand the issues and have the ability to coordinate and act while the window to address climate change is still open.