KUALA LUMPUR, Malaysia, May 5, 2015 /PRNewswire/ — The Islamic Finance industry has produced specialist scholars with unique knowledge of the intricate workings of the finance industry, and the specific Syariah rulings that are applicable to banking and financial transactions. 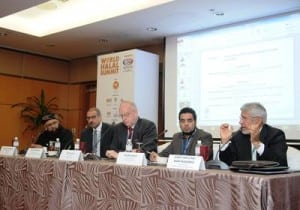 In the third session of the Scholars Forum at the recently held World Halal Summit (WHS) 2015, Judge Hafiz Mahomed, Vice President of the Islamic Council of South Africa stated that the main issue today is that there are very few specialist scholars with the equivalent levels of knowledge and training in the Halal sector.

Daud Vicary, President of INCEIF (International Centre for Education in Islamic Finance) in Malaysia, encouraged Muslim scholars to continue their professional training and expand their expertise in order to fully understand and experience the economy, especially for banking and legal systems, to ensure that professional standards are being applied within the Halal industry.

In the same session, Dr. Ayoub Kazim, Managing Director of Education Cluster of TECOM Business Parks of the United Arab Emirates (UAE) called for the industry to give due attention to Halal’s related sub-sectors. Not solely focusing on the food and beverage industry, Halal support sectors such as ICT, transportation, logistics, tourism and hospitality must also be given more attention.

Dr. Ayoub in making the call suggested, “Tripartite partnership cooperation, consisting of academia, industry and the government as role players, is definitely needed to strategise and spur the growth of the Islamic economy.”

In this session, it was also brought up that fatwas (judgments/ rulings) relating to the Halal industry are also few and far in between. The session closed with a suggestion that professional education and training can gradually unify Muslim scholars, possibly resulting in the concentration of Halal-related fatwas within one central repository.

The fourth session began in earnest in the afternoon of the second day of WHS 2015, with its moderator, Abdalhamid Evans, Founder of Halal Focus and WHS Conference Director, lambasting the lack of concern and coverage on food commodity speculation. According to Abdalhamid, there has been zero opinion raised from the Muslim world on this topic until today; food commodity speculation has undoubtedly caused extreme hardships, leading nations to starvation and even deaths.

Food commodity speculation is also a disturbing prevalent issue within the Halal market; especially considering that not all of the money raised from the food market is channelled back to the food supply chain. Instead, they are re-invested in other businesses with little or no economic value or impact to the Halal market.

“There is a need for Islamic commodity exchange by implementing Halal producing, Halal trading and Halal financing methods,” suggested Daud Vicary. “This is where Islamic finance comes in – by setting certain standards to go into the real economic industry and prevent speculators to play with the prices.”

“The world is filled with materialists,” said Prof. Dr. Saim Kayadibi, Chairman of the European Union Halal Standards Committee (CEN). “Humanity must be aware and understand the destructive path that food commodity speculation leads and the inequalities of food distribution that follows,” he said.