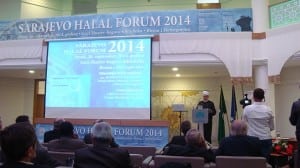 The third Sarajevo Halal Forum was held in Sarajevo on Friday. It is held under the auspices of Husein ef. Kavazovi?, reis-ul-ulema of the Islamic Community in Bosnia and Herzegovina, partnered by the companies GHB Invest Center Skenderija Sarajevo.

“Halal is what is allowed and what is good. It is also the behavior and attitude and intention and action,”said Reis Kavazovi?.

“Halal is important not only for Muslims but for all people because it advocates healthy and clean food, halal earnings and cost-effective management of living resources,” said Reis Kavazovi?.

In the period between the two Forums, this year’s and last year’s, a number of positive developments have been made which testify to the dynamism of the halal sector, said Amir Saki?, Director of the Agency for Halal Quality Certification, at the opening of the Forum.

Sead Ma?ki?, director of the Food Safety Agency BiH rated the cooperation between the FSA with the Agency for Halal Quality Certification as very positive.

He reminded that in 2008 the concepts of Halal products and Halal food systems was introduced, which are defined by special regulations.

Edin Smaji?, director of the GHB group, stressed the importance of joint action of various institutions in the promotion and advancement of halal standards in the region.

The establishment of the Association of Producers is very significant, he pointed out, since in this way the Chamber of Commerce, i.e. the country in improving the halal sector, is included.

“We have the Islamic Community, a non-governmental organization, the Agency for certification and a department at the Chamber of Commerce, which is a big step forward in the last twelve months,” he concluded.

This year’s Halal Forum was divided into two sessions, and it was completed with awarding certification.

The certificate was awarded to the company Bosnet Group d.o.o. Hadži?i, the first company in Europe that produces halal food for fish.

“Most farms use fish food produced on the basis of pig blood plasma and such fish is not halal,” it was said at the Forum.

With this certificate, the producers of fish in BiH will be able to get halal certification and market their products on the domestic and foreign markets, it was concluded at the Forum.