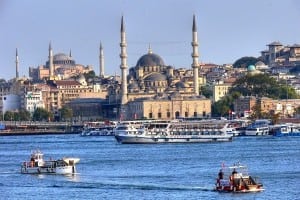 DUBAI: UAE tourists would like to visit Turkey as their next European holiday destination in new research which looked at past and future travel behaviour across the Middle East and Far East.

The Muslim Travel Index Europe 2014, released on Wednesday, has shown that Turkey is the number one country of choice for tourists in the UAE as a future place to visit.

According to a detailed study of UAE residents, Turkey topped the list with 39 per cent of the vote with England in second place with 38 per cent, followed by Spain, 37 per cent and France (36 per cent). Italy also made the top five with 35% of the vote.

The biggest reason tourists, at 71 per cent,  said that they wanted to travel to Turkey to visit the country for the first time and experience what it had to offer. This was followed by 59 per cent wanting to know about its Islamic heritage. The research found England was the most popular destination previously with 42 per cent having visited the country. The Index also revealed the importance of adhering to Islam while travelling abroad with a huge 93 per cent of Emiratis saying it was important that the country they were visiting had facilities that catered for a halal lifestyle.

The Muslim Travel Index Europe 2014 looked at the attitudes and behaviour of majority Muslim populations to tourism in the future and their experiences of countries they have already visited in Europe. The full report will be launched next month at the world’s first ever Halal Tourism Conference being held in Spain.= The halal tourism sector was worth €103 billion in 2013 representing around 13 per cent of global travel expenditures. This figure is expected to reach €141 billion by 2020.
“This Index is an excellent indicator of the travel needs of UAE tourists using past and future data and findings,” said Tasneem Mahmood of CM Media, who are organising the world’s first halal tourism conference in Spain in September.

“It is a great detailed analysis of how catering for the needs of UAE tourists will lead to an increased number of visitors to Turkey, England, Spain and all of Europe.

“This research represents a great opportunity for tourism boards, tour operators, travel agencies, hotels, restaurants and the entire sector across the world in understanding the needs of UAE tourists and how to address them especially considering how much they love travelling.”

The Muslim Travel Index Europe 2014 gave a deep insight into the behaviour of UAE tourists. Of those surveyed, 42 per cent had previously visited England, 26 per cent had been to Italy and 24 per cent to Turkey.

Of those who had been to England, 69 per cent said it was because they wanted to go sight-seeing while 57 per cent wanted to come for the cooler climate.

Official data from the UK Government showed that 262,000 visited the UK in 2013 from the UAE spending Dhs156  a day – the second highest of any country coming to the UK- contributing billions to the economy.

Around 29 per cent of those who had previously visited Europe stayed for less than seven days while a further 24 per cent stayed for 10 days. Of those surveyed 43 per cent travelled to England for a holiday break with family.