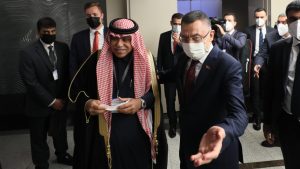 The meeting came amid Turkey’s hosting of the 7th World Halal Summit and the 8th Organization of Islamic Cooperation (OIC) Halal Summit.

The pair met at the Istanbul Convention Centre, where they discussed trade and bilateral relations, Turkey’s Anadolu Agency reported.

The meeting came amid Turkey’s hosting of the 7th World Halal Summit and the 8th Organization of Islamic Cooperation (OIC) Halal Summit.

“We should meet on a common ground and act together to contribute to the halal economy,” Oktay said at the summit, according to Daily Sabah, stressing that a reliable global halal certified trade environment will benefit “all of us, all Islamic countries and our private sector.”

Strained ties between Ankara and its Gulf rivals, namely Saudi Arabia and the United Arab Emirates, appear to have cooled in recent days, with meetings between top officials.

The meeting resulted in the signing of trade memorandums and the UAE announcing a $10 billion fund to support mainly strategic investments in Turkey.

Ankara and Abu Dhabi have in the past years found themselves on opposing sides of the conflict in Libya as well as tensions in the Gulf and in the eastern Mediterranean.

In addition, Saudi Arabia and the UAE has been deeply disturbed by Turkey’s support for the Muslim Brotherhood in the region, which Arab nations see as a threat. Ankara, for its part, suspects that the UAE backed a network led by a US-based Turkish Muslim cleric which Turkey accuses of orchestrating a failed coup in 2016.