banker when he judged that helping the poor and needy was more of a calling than working in finance.

“I wanted to do something real, something tangible and I realised that the financial industry destroys as much as it creates,” Mr Khan says.

“So what did I know? I knew food and finance.”

Trained as an engineer at Imperial College London and the University of Oxford, Mr Khan subsequently did stints with banks including Goldman Sachs and Lehman Brothers in London before striking it out on his own in Dubai as corporate financial adviser.

Being based in the Middle East for almost a decade, he says, opened his eyes more to war and the suffering endured by those caught up in it. He also noticed that when it came to food aid, refugees and the displaced in conflicts such as those in Syria and Afghanistan were not getting proper nutrition.

Most of the aid that was coming out of the Arabian Gulf was in the form of dry foods such as pulses and rice. But for those caught up in wars and natural disasters, it can be difficult to get hold of water and a means of cooking such foods.

“What was sent was dry rations, lentils, pulses, oil,” he says.

“Imagine that you are sitting in a bombed-out house with these dry rations in front of you. How are you going to cook? In Asia, there was a precedence of sending ready-to-eat meals but in the GCC because there was no manufacturer, no one ever thought of this.

“The absence of halal food relief globally, where there is disaster, man-made or natural, it is next to impossible to get decent halal food to people who need it,” Mr Khan says.

The gap seemed so glaring that he decided to do something about, taking a gamble and buying a food factory in Abu Dhabi. Extensive market research was deemed unnecessary, he says, as the need was so obvious that he was sure that his products would sell. 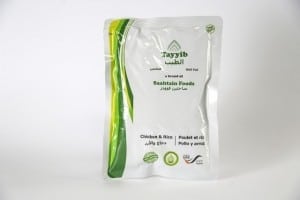 Mr Khan says he is not too comfortable about revealing too many details about his business as he believes many have been keen to imitate him following his success. He is, however, willing to say that his factory in Abu Dhabi has the capacity to produce five million food pouches a year and that his humanitarian company, Tayyib Foods, sells each pouch for Dh5 apiece.

The pouches, which look like the Nasa ready-to-eat meals as seen in the recent Hollywood blockbuster, The Martian, are filled with about 250 grams of food, spanning a menu of more than 90 dishes. Chicken biryani and chicken kabsa top the list of the best-selling pouches, according to Mr Khan. The ready meals can last up to three years in temperatures of up to 35°C.

His main customers for the food pouches are charities and large corporations that need supplies for their corporate social responsibility programmes. Tayyib, however, got a big break during August 2013, six months after it started up, supplying humanitarian supplies to the residents of Gaza.

“The UAE created an aid corridor and companies who bought our meals, we were able to send them on August 18 using these aid corridors to Gaza, which was delivered on the ground by the UNRWA,” Mr Khan says. 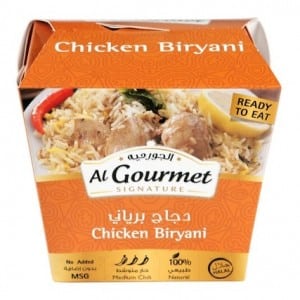 While his idea for humanitarian food pouches came from an impulse primarily to do good, his dream does not stop there. From the seeds of the initial idea Mr Khan envisages building a global halal food empire through his holding company Saahtain Foods that caters not just to the displaced – but for all the world’s 1.6 billion Muslims who make up nearly a quarter of the world’s population.