Four-day Chinese fair at Expo Centre Sharjah offers a slew of business and investment opportunitiesSharjah: With China being the UAE’s second largest non-oil trade partner, the Chinese Commodities Fair Sharjah (CCFS) that got under way today (December 5, 2011) at Expo Centre Sharjah is set to give a big thrust to trade exchanges between the two countries. 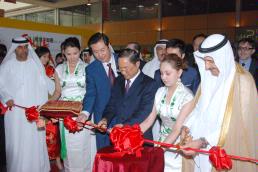 Non-oil trade between China and the UAE amounted to US$ 12.5 billion in 2010, an increase of nine per cent over 2009, amid expectations that the figure will increase this year.

According to latest statistics, the bilateral trade exchange has already shown a 9.5 per cent increase in Q1 2011, with tourism, halal food & related products, financial services, real estate, construction and energy being strategic areas of economic and trade cooperation between the countries. Both the countries will be looking to focus on yet-to-be-fully-tapped sectors such as manufacturing, electricity, gas and water industries.

With the UAE remaining one of the largest export markets for China and a gateway to the entire Middle East and surrounding regions, CCFS will be the best platform for businesses from both sides to augment their trade relations, according to a cross section of business executives and government officials from both the UAE and China who attended the opening of CCFS on December 5 (Monday) at Expo Centre Sharjah.

The four-day show was jointly inaugurated by Mr. Jiang Yaoping, Vice-Minister, Ministry of Commerce, China, and Mr. Ahmed Mohammed Al Midfa, Chairman of the Sharjah Chamber of Commerce and Industry (SCCI). It will conclude on December 8. The fair is being held under the patronage of H.H. Sheikh Sultan bin Mohammed bin Sultan Al Qasimi, Crown Prince and Deputy Ruler of Sharjah.

“Trade relations between the UAE and China have been progressing remarkably well with every passing year. This has been made possible by a slew of agreements and MoUs signed by the two countries in recent years and the exchange of high-levels visits,” said Mr. Al Midfa.

“CCFS is presenting dealers and suppliers in the region an opportunity to do business with a country that is the world’s second largest economy with consistent double-digit growth rates. It is also the largest exporter and second largest importer of goods in the world. CCFS will go a long way in maintaining the sound momentum of commercial cooperation and high-level exchange of visits between the countries,” he added.

“While both the nations have synergies in many areas, China has considerable expertise in several industries that are the focus of bilateral trade. What makes Chinese products unique is their wide range of high-tech products that has excellent quality-to-cost ratio,” he said.

The UAE is home to around 3,000 Chinese companies, while projects owned jointly by the two countries have peaked at nearly US$ 12 billion. According to the Chinese Ministry of Commerce, during the last two years, Chinese firms have secured over US$ 4.8 billion worth of contracts in the UAE, while the UAE is the largest Arab investor in China with more than 650 projects.

CCFS will be marking the milestone 10th edition of the show, with several new special focus areas. Apart from over 100 standard booths by over 80 leading enterprises from 15 Chinese cities, the show will have a new theme – ‘Chinese Cities’. This edition, as the representative, Wuhan city will feature local products, culture, tourism and investment opportunities. An overall landscape about Wuhan city will be shown on site.