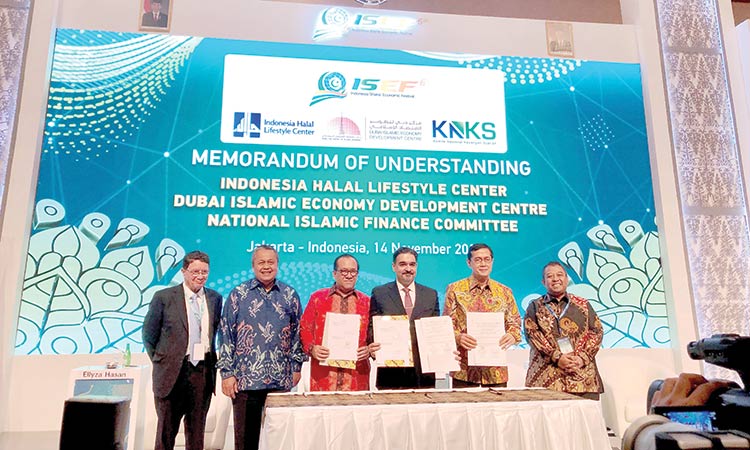 Abdulla Mohammed Al Awar, CEO of DIEDC, signed the first agreement with Sapta Nirwandar, Chairman of ILHC, and the second agreement with Ventje Rahardjo, Executive Director of KNKS, in the presence of senior representatives of the three entities.

The MoUs provide a framework for collaboration between DIEDC and the two Indonesian organisations with a focus on knowledge sharing, joint exhibitions, exchange visits, and workshops. Their objectives also include the introduction of the halal industry through IHLC and Islamic finance through KNKS to new markets, as well as leveraging the entities’ expertise to raise the profile of the Islamic economy.

Both the UAE and Indonesia have enjoyed friendly relations, rooted in shared values and solidarity, for over 40 years. Significant increases in population, digital connectivity, and ethical consumerism have contributed to a 5.3 per cent year-on-year growth of the global Islamic economy – a $2.2 trillion industry that serves 1.8 billion Muslims worldwide. The agreements seek to strengthen the ability of the three entities to capitalise on the rising demand and engage with potential stakeholders in key markets.

Muslims in Indonesia spent nearly $225 billion across Islamic economy sectors in 2018. In May 2019, the country launched the Indonesia Islamic Economic Masterplan 2019-2024 that outlines ambitious initiatives aimed at supporting a vibrant ecosystem of companies active in sectors ranging from halal food and products to halal tourism and Islamic finance.

For its part, the UAE continues to build its credentials as a hub of Islamic trade and finance. The nation ranked second in the Global Islamic Economy Indicator 2019/20, and first in the halal food, modest fashion, halal media and recreation, and halal pharmaceuticals and cosmetics sectors.

Held annually in Jakarta, ISEF supports Indonesia’s efforts to expand the Islamic economy. A highlight of the sixth edition of the festival was Indonesia International Halal Lifestyle Conference, Forum and Expo (INHALIFE) that featured a keynote address by Abdulla Mohammed Al Awar, as well as forum discussions on topics such as ‘Global Network Chain and Emerging Technopreneurs’ and ‘Global Challenges and Potential: The Next Asian Unicorn’. The gathering witnessed several other agreement signings between participating entities and marked the launch of DIEDC’s State of the Global Islamic Economy 2019/20 report in Indonesia.

Abdulla Mohammed Al Awar said: “This is DIEDC’s second visit to Indonesia in less than a quarter, which is a direct reflection of the key role the nation plays in the Islamic economy domain as well as the deep-rooted ties between our two countries. The UAE and Indonesia share a vision not only of economic prosperity and strong bilateral trade relations but also of sustainable growth of the Islamic economy.”

Speaking on the MoUs, he added: “We welcome these agreements that aim to advance our endeavours to stimulate the growth of the halal and Islamic finance sectors and the wider Islamic economy. Today, DIEDC is shaping the new Islamic economy landscape worldwide. We are confident our strategic collaboration with IHLC and KNKS will strengthen the presence of Islamic economy in Indonesia, and look forward to a long-term productive partnership with Islamic economy entities in the country.”

“As a country with the largest population in the world, it helps us to not just be consumers of halal products, but also become producers of such products for the global market,” said Perry Warjiyo, the Governor of Bank Indonesia, in his remarks at the official opening of the International Halal Lifestyle Conference 2019 (INHALIFE) on 14 November, 2019, at the Jakarta Convention Center, Indonesia. The event, under the theme ‘Creating Halal Champions Accessing the Global Halal Market: From Potential to Reality’ was held by the Indonesian Halal Lifestyle Center in collaboration with Bank Indonesia, highlighting a series of case studies from the 2019 Indonesia Sharia Economic Festival 2019 (ISEF).

Perry Warjiyo also commended the efforts of the Indonesian Halal Lifestyle Center (IHLC), which since its establishment, was very concerned with supporting the bank’s vision. “I thank Sapta Nirwandar and the IHLC team who are very attentive and serious in realising a big vision that makes Indonesia not only a consumer but also a producer of halal products for the global market,” said the Governor of Bank Indonesia.