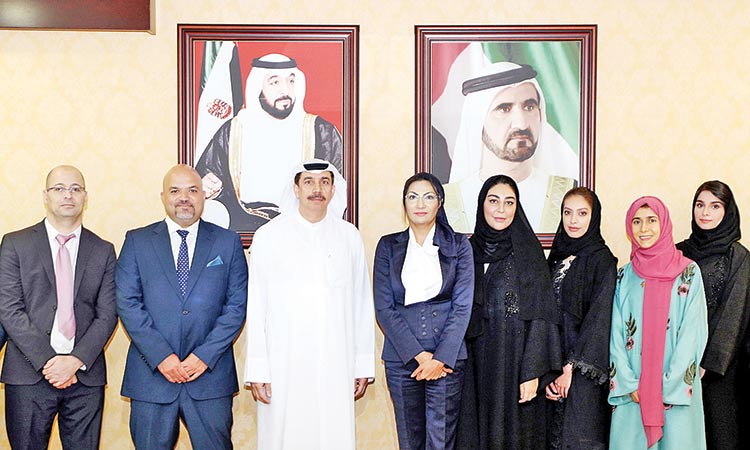 Officials during the event.

As part of its leading role amongst regional exchanges as well as its status as ‘The World Class Regional Marketplace’, the Dubai Financial Market (DFM) launched its Sustainability Strategic Plan 2025 aimed at underpinning its continuous efforts to promote Environmental, Social and Governance (ESG) best practices amongst listed companies and other stakeholders.

This Strategy aims to create long-term shared value for DFM stakeholders and ultimately lead to position the exchange as the region’s leading sustainable financial market by 2025.

In order to streamline the implementation of the Sustainability Strategy, the DFM has formed a Sustainability Committee that will focus on creating awareness amongst local and regional investors and other stakeholders to further solidify Dubai’s position as a regional investment hub and contribute to Dubai’s and the UAE’s sustainable development agenda, in line with the global Sustainable Development Goals (SDGs).

The committee will also launch a series of initiatives to increase awareness on the importance of ESG investing and encourage listed companies to adopt ESG reporting practices, which reinforces their ability to attract investments, access finance and enter new markets through good governance practices.

Essa Kazim, Chairman of DFM said: “Since 2016, the DFM has been actively promoting best practices of sustainability amongst market participants and we are looking to become the region’s leading sustainable financial market by 2025 through the creation of long-term shared value for our various stakeholders.

The Plan is a stepping-stone for DFM’s extensive efforts to drive change and development in the capital markets sector in the UAE and the region. It also underscores our commitment to align our efforts with Dubai’s Sustainability and green economy drive as well as its status as the capital of Islamic economy globally, especially given that responsible investing, sustainability and environment protection are some of the key objectives of Islamic sharia’a.

For this purpose, the DFM is prioritising sustainability in every aspect of its corporate strategy and organisational operations. We are actively promoting sustainability amongst our issuers, encouraging them to expand in ESG reporting considering its growing significance amongst factors affecting investment decisions as well as educating investors on the principles of responsible investment.”

It is noteworthy that the DFM is cooperating with international and local entities to promote ESG best practices by organising workshops for brokers, investors, analysts and listed companies about the evolving trends of ESG reporting and investing.

The DFM is an active contributor in the United Nation’s Sustainable Stock Exchanges (SSE) initiative advisory groups on sustainability and responsible investing matters.

About Dubai Financial Market: Dubai Financial Market (DFM) was established as a public institution with its own independent corporate body. DFM operates as a secondary market for the trading of securities issued by public shareholding companies, bonds issued by the Federal Government or any of the local Governments and public institutions in the country, units of investment funds and any other financial instruments, local or foreign, which are accepted by the market.

The DFM commenced operations on March 26, 2000 and became the first Islamic Shari’a-compliant exchange globally since 2007.

Following its initial public offering in November 2006, when DFM offered 1.6 billion shares, representing 20 per cent of its paid-up capital of Dhs8 billion, DFM became a public joint stock company and its shares were listed on March 7, 2007 with the trading symbol (DFM).

Following the IPO, the Government of Dubai retained the remaining 80 per cent of DFM Company through Borse Dubai Limited. Earlier Dubai Financial Market reported a 9 per cent increase in second quarter net profit as income from investments grew.

Net profit for the three months ending June 30 climbed to Dhs37 million, the DFM said in a statement on its website. Investment income rose to Dhs36.6 million for the second quarter, up from Dhs30.4 million in the corresponding period, it added.