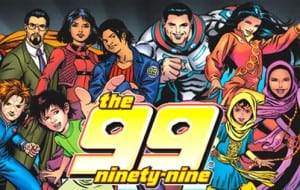 Shortly before the New Year, I received an email from Thomson Reuters informing me that THE 99, an initiative of Teshkeel Media Group, one that I had carefully and meticulously staged to reflect values that Muslims share with the rest of humanity, one that promotes tolerance, diversity and respect of others, and one that was financed according to Sharia principles, had won in the media category of the much coveted Islamic Economy Awards. The award is presented to initiatives that better the Muslim population economically and socially. What makes the award doubly rewarding is that it was to be presented by His Highness, Sheikh Mohamed Bin Rashid, Ruler of Dubai, Vice President and Prime Minister of the United Arab Emirates. Sheikh Mohammed is a role model for all leaders and entrepreneurs alike. THE 99 have won numerous awards and recognitions, but this one is spot on.

I was worried to get that email. I was worried for myself but more importantly I was worried for the entrepreneurial future of my country, a country that employs over 90% of its citizens and in the wake of falling oil prices, is in desperate need of an entrepreneurial ecosystem. I know that legally this case can go nowhere as THE 99 has all the right supporting documents to make it legal in all the countries it was distributed in. It was not only financed by an Islamic Bank, and subjected to a Sharia board, it was approved by the Ministries of Information in Kuwait and Saudi Arabia among others. And the then Kuwaiti Minister of Information spoke accolades about it to a packed theater of diplomats and ministers in an event under the patronage of His Highness the Emir of Kuwait. My main worry is that cases like this may end up terrorizing others from pursuing entrepreneurial projects that are outside of the box. I refuse to let that happen.

A few days after that a major venture capitalist who I had met at the Young President’s Organization retreat in Dubai, emailed me to begin discussions to license THE 99 for gaming. The VC in question has several gaming development companies and is excited about getting THE 99 into the hands of millions more.

I was extremely hopeful to get that call. I was hopeful for THE 99, but I was more hopeful for the region. I was hopeful because here was a Western Venture Capitalist interested in licensing an intellectual property from Kuwait and take it to a global audience. This speaks volumes to the region’s entrepreneurial promise.

Shortly thereafter, I received the email that most of you received on your email alerts about the sad terrorist murders at Charlie Hebdo. There is no question that the content of that magazine is heinous and hateful. There is no question that double standards exist in France, wherein one of the magazine’s staff members was fired for anti-Semitism in 2009 yet anti-Islamism is condoned. But there is also no question that these ghetto drug taking losers who “found Allah” 5 minutes before killing innocents in the name of the prophet have increased the circulation of the magazine and brought the attention of the drawings to billions of people and made life even more difficult for Muslims in France. In fact, the action of these terrorists has ensured that the drawings are seen by the whole world. So what exactly was the objective? If the objective was to stop circulation of the magazine, that surely backfired.

What worried me aside from the tragedy and its implication for East-West relations is the insistence of some in the media that Muslims need apologize for the actions of these gangsta Jihadis. That somehow, all Muslims must accept responsibility.

I refuse to apologize for drug taking ghetto trash that decided to go gangsta in the name of the Prophet. I refuse to apologize for shoe bombers and underwear bombers who literally stunk it up for the rest of us. I refuse to take responsibility for suicide bombers and illiterate imams who spew hatred in their respective pulpits. I will not accept to be judged as a Muslim based on the actions of the deranged, the ill informed and the uneducated. I am no more responsible for their actions, than my Christians friends are for the actions of Anders Brevik, David Koresh, Timothy McVeigh, child abusing priests and countless others. I will only be judged for my actions.

And, as I stood on stage receiving a positive judgment from Sheikh Mohammed and the jury of the Islamic Economy Award this week, I couldn’t help but think what a shame it is that in my own Kuwait, the jury is still out.