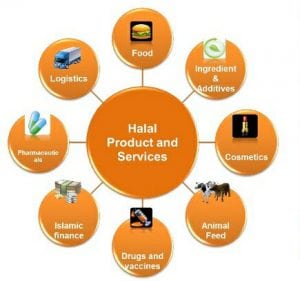 The global Halal economy is estimated to touch the $6.4 trillion mark by 2018 against $3.2 trillion, reported in 2012, according to a latest report, while Dubai reinforces its position as the capital of the global Islamic economy as it opens doors to the 9th edition of the Halal Expo Dubai tomorrow, Monday, September 18.

The GCC countries import US$50 billion (Dh183 billion) worth of Halal products, according to a latest research by Farrelly and Mitchell – a food and agri-business specialist. Of this, the UAE’s Halal import bill is $20 billion (Dh73 billion), or about 40 per cent of the GCC’s Halal imports.

UAE is home to 5,000 importers, manufacturers and stockists of Halal products. Emirates Authority for Standardisation and Metrology (ESMA), the country’s standardisation authority, is expected to issue 18,000 Halal certification this year – which is one of the highest in the world.

These developments are a direct result of the vision of the government as envisioned by His Highness Sheikh Mohammed bin Rashid Al Maktoum, Vice-President and Prime Minister of the UAE and Ruler of Dubai, when he declared his intention to transform Dubai as the global capital of Islamic Economy in 2013.

“Thanks to its steady growth, increasing assets and straightforward principles, Islamic economy has become an established reality within the system of global economy. Through the huge economic opportunities provided by Islamic economy, and the massive partnerships that it can create, Islamic economy can provide a key to further stability and development in our region,” Sheikh Mohammed bin Rashid Al Maktoum, Vice-President and Prime Minister of the UAE and Ruler of Dubai, said in a statement earlier.

Subsequently, the government has created Dubai Islamic Economy Development Centre (DIEDC), which is supporting the Halal Expo Dubai – a major exhibition participated by nearly 100 companies from more than 15 countries including national pavilions from Malaysia, Kazakhstan, China, Pakistan, Indonesia and the UAE.

Dubai Food Park, a government initiative, has inked a Dh1.35 billion deal to establish a UAE-China food industrial cluster that will eventually support China’s US1 trillion investment in ‘One Belt One Road’ initiative and help promote the speedy expansion of the Halal products and services across Asia, Europe and Africa.

Sultan bin Saeed Al Mansouri, UAE Minister of Economy, has said earlier, “Dubai and the UAE are instrumental in raising awareness about the culture of Islamic economy worldwide and boosting global interest in adopting its principles.

“Today, non-Muslim countries view Islamic finance, halal lifestyle, and sharia-compliant trade and industry as the pillars of their sustainable development plans. The Islamic economy strategy adopted by Dubai and the wider UAE is truly unique in its ability to foresee economic changes, offer secure investment options, and utilise bonds to finance major projects across the globe.”

The two-day exhibition is expected to be attended by 4,000 people – mostly buyers and sellers of Halal products and services – from 40 countries.

Raees Ahmed, Director of Orange Fairs and Events, organiser of the Halal Expo – Dubai, 2017, says, “Halal Expo Dubai is part of our efforts to help Dubai strengthen its position as the global hub of Halal and Islamic economy. The two-day exhibition will create the right meeting point for international buyers, sellers, producers, manufacturers, importers, exporters and wholesalers of Halal and Islamic products and services and help generate businesses for the leading international Halal suppliers through Dubai.

“Halal foods are considered to be healthy and hygienic. A growing number of non-Muslim consumers prefer halal foods, as they are deemed safer. As a result, the distribution of halal foods has expanded beyond traditional markets in cities such as Shanghai which has 80,000 Muslims.”

China, the world’s largest producers and suppliers of consumer products and services, has taken Halal products seriously. China’s halal sector is expected to reach $1.9 trillion by 2021, a CAGR of 9 per cent from 2015, according to research.

“China is witnessing a growth in the number of national halal food players as well as partial halal product lines. In addition to demand from Muslim population, growing popularity of halal foods as a healthy option is also driving demand.”

Chinese Halal products exporters are participating under a 15-strong national pavilion at the Halal Expo Dubai, to be held at the Roda Al Bustan Hotel, Dubai from September 18-19, 2017 that will widen the choice of Halal products for local importers and consumers in the UAE and the Gulf.

“We have witnessed a strong response from the Chinese manufacturers – who are taking Halal products and distribution more seriously,” Raees Ahmed says.

Orange Fairs and Exhibition LLC, is organising Halal Expo – an international exposition to highlight the growth in the ethical, moral and halal and healthy living, products and services.